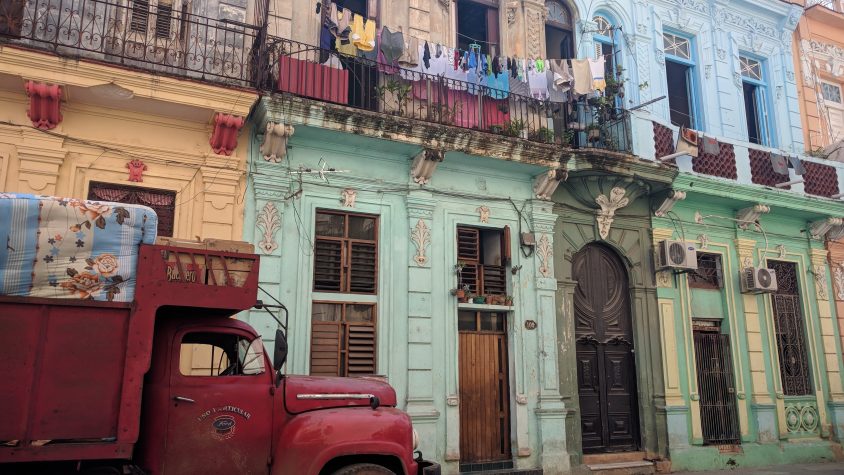 When you think of Cuba you probably think of old cars, dilapidated old buildings and rum and I was exactly the same until I started researching for my final long haul trip of this year, a week in Cuba with my brother. While researching we found beautiful beaches, forests, tobacco plantations and gorgeous colourful towns. Cuba has been on my bucket list since I was about twelve and it didn’t disappoint. Seeing as we were only there for a week we didn’t deviate too much from the tourist trail but along the way we managed to see a lot of real Cuba, including inside a tyre shop to fix the obligatory Cuban puncture!

First word of advice here, if you choose to hire a car in Cuba, as we did, it will be fine and the hire car was not nearly as bad as the internet led us to believe, but it is not a relaxing drive. Not because the other drivers are bad, the roads are very quiet out of Havana, but you have the constant threat of HUGE potholes which means you are on constant alert. Doesn’t mean I wouldn’t have driven though, it made our first two stops so much easier than doing by taxi or bus but I was secretly quite glad when we dropped the car back and I could relax in the back of a cab! Organising a hire car in Cuba was interesting too which I won’t go into but WOWCuba were absolute life savers and helped us organise the car.

After landing in Havana and a slightly scary very dark drive into Vedado for our first night we set off the next morning in bright sunshine to Vinales. This area had been a must on our list as soon as we started researching Cuba beyond Havana. An amazing landscape with bright red soil studded with these amazing hills called mogotes and tobacco locations. The roads were not only full of potholes but studded with ponies and traps, horse riders and all manner of bicycles. A real step back in time and a feel for what the real Cuba might be like. 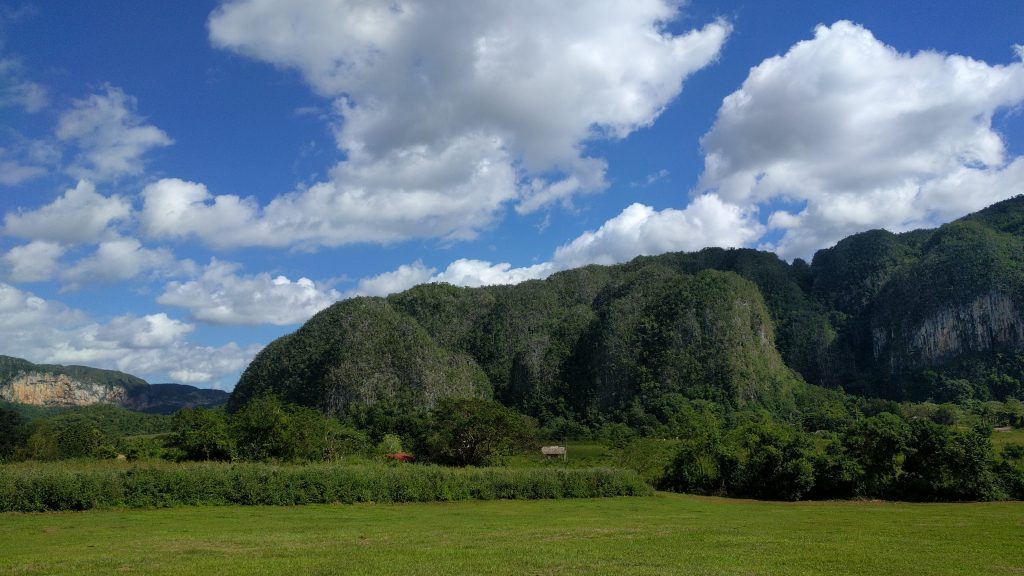 Vinales is absolutely studded with places to visit, walks to do and areas to explore but as we only had one day and one night there we decided to tick off two of the most famous attractions, the Mural de la Prehistoria and Cueva del Indio. Although both quite touristy things to do we really enjoyed seeing the huge mural painted in the 1960’s and the boat ride you get through the caves at Cueva del Indio. Neither were overpriced or busy and we even managed to do a bit of bouldering at the Mural de la Prehistoria.

What really made our stay in Vinales though was the Casa Particular we stayed at. Yuneyka and Yuray and the rest of the family at Villa El Habano were so welcoming and when the morning view from your terrace looks like this you can’t go wrong! 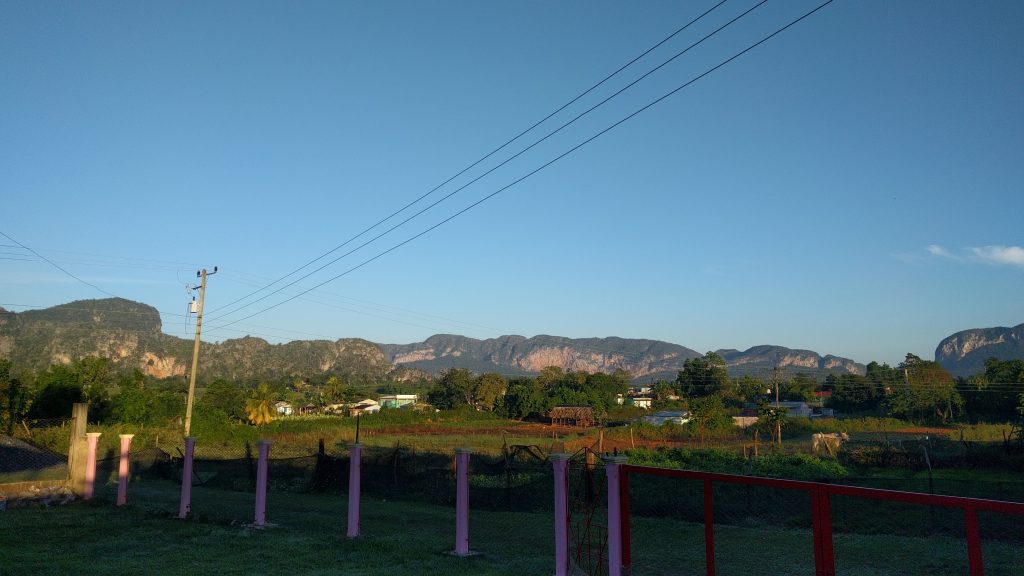 Vinales is a gorgeous little town itself with a colonnaded main street of colonial style houses, plenty of restaurants serving local food and bars serving mojitos to the usual cuban live music. It obviously makes a fair amount of its money from tourists but there’s still plenty of locals around to make you feel that you’re not in a resort. I’d loved to have spent longer in Vinales and done some walks through the hills but maybe next time!

Taking the road slowly, aware of every bump and jolt and avoiding potholes like the plague we made it from Vinales to Las Terrazas. The only eco village and hotel in Cuba it was set up in 1968 with it’s only hotel, Moka, being built in 1992. We stayed here for one night perched on top the hill overlooking the village and lake from the hotel lobby with a huge tree growing through the centre. The highlight of our stay was a 12km guided hike organised through the hotel with Julie the most amazing local guide. This led us through forest, coffee plantations and round the bottom of one of Che Guevara’s training hills all while being introduced to Cuban birds and plants. We were so lucky to see both a bee hummingbird and also the Cuban Trogon, the national bird, resplendent in blue, white and red. 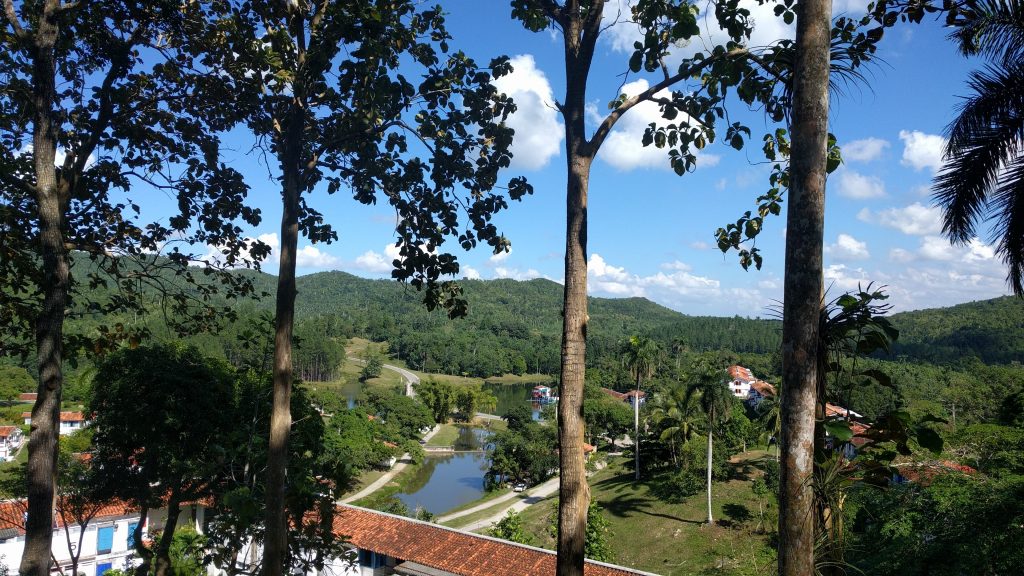 The main attraction of this hike though wasn’t the flora and fauna or even the 300 year ruins of French coffee plantations or the freshly macheted coconuts for drinking, it was wild swimming in the river and it was so worth the sweaty hike. The swimming pools of San Juan, a naturally terraced area of the river are a lush green oasis of bubbling waterfalls and deep pools, perfect for a cool off and popular with locals and tourists alike. 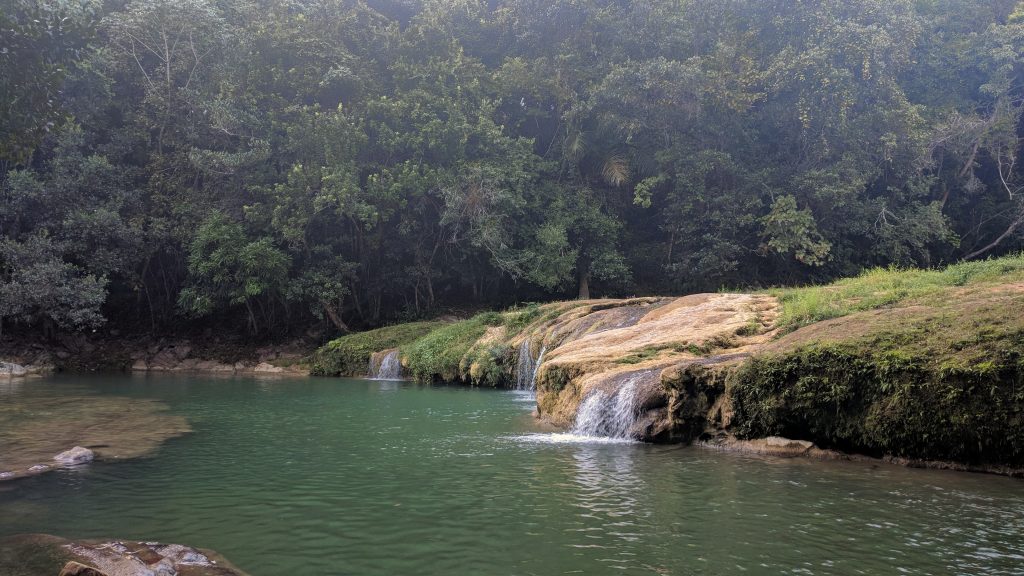 The third destination of our trip marked the end of pothole watch. We dropped the hire car back at the airport and got a taxi for the two and a half hour journey across the plains of Cuba to the Bay of Pigs. Not only famous for the failed American backed invasion of Cuba it’s also home to some of the most beautiful beaches in Cuba. We based ourselves at Hostal Kiki in Playa Larga at the head of the bay for two nights and both completely relaxed. I loved the exploring we had already done in Cuba but it was so nice just to flop on the beach with a mojito and a good book (The Book of Dust in case you were wondering). The Casa Particular was directly on the beach and we were so lucky to have scored the upstairs room with the most incredible balcony view. 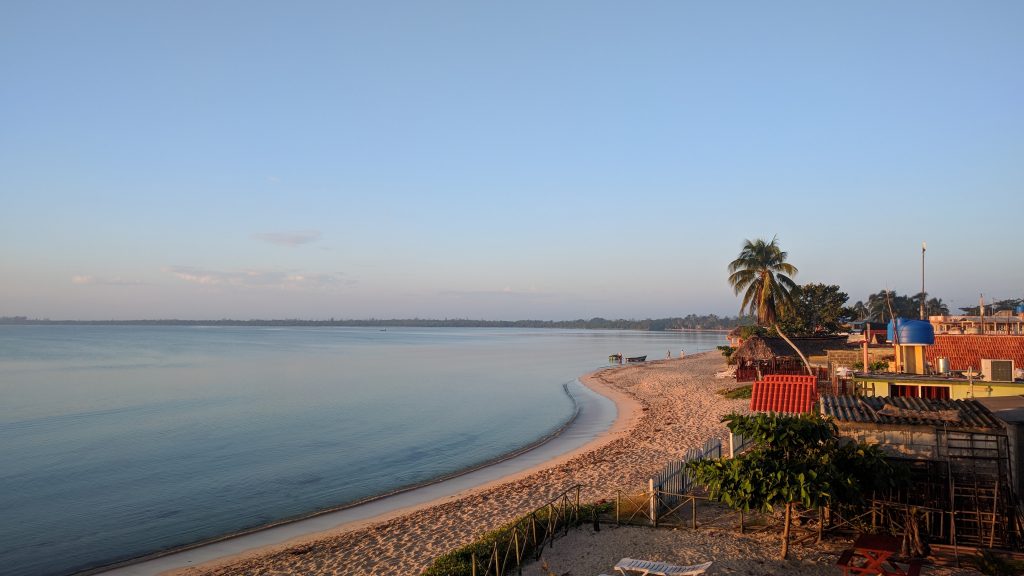 We didn’t really have any huge plans for Playa Larga, a bit of swimming and snorkelling and Playa Larga suited this laid back attitude. The town is small and mainly based along the beach front with a few larger casa’s opening their terraces up to tourists for dinner and drinks but its basically a barefoot, mojito drinking, fish eating paradise. Super chilled and with no delusions of grandeur or high rise buildings with a constant soundtrack of live Cuban salsa. If you didn’t want to be as lazy as us there’s also good dive sites nearby, lots of bird watching and a fair bit of history related to the invasion further down the coast at Playa Giron. For me though I was more than happy with the sand and the sea watching the fisherman further out in the bay. 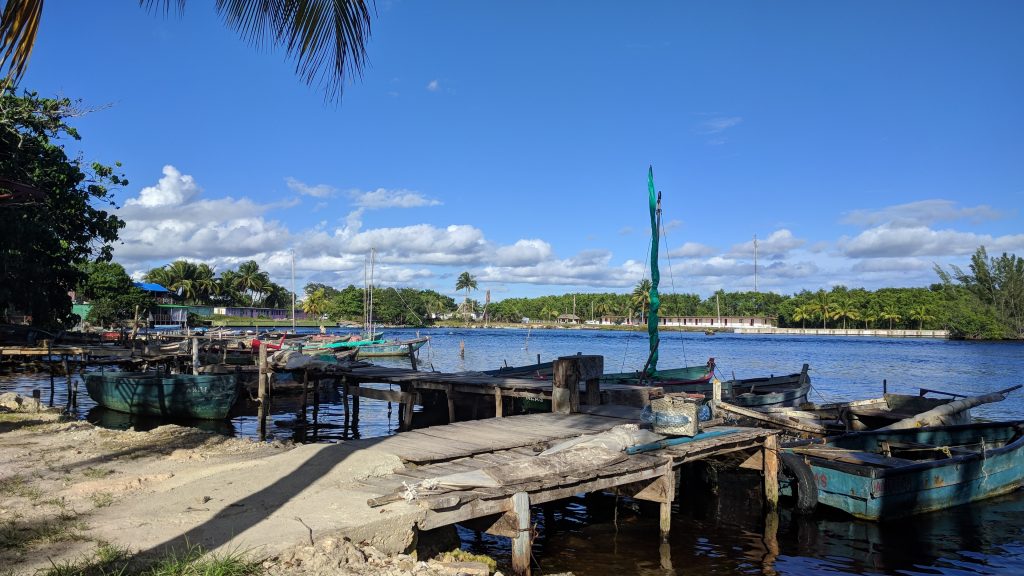 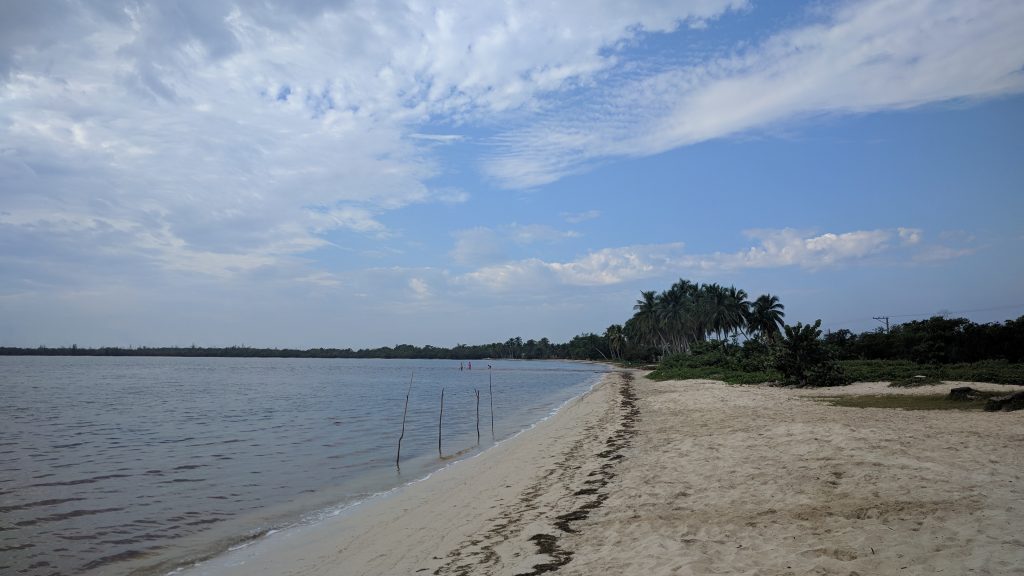 Our trip ended in Havana which was actually one of the best ways of structuring our trip, it meant we were leaving the familiar exciting bit until the end and experiencing the unknown first. I was so excited to finally see Havana and experience all the turquoise buildings, pink cars and cobbled streets that had been prevalent in my travel scrapbook for years. Havana did not disappoint, it was as beautiful and interesting as I had always hoped and every corner had a photo opportunity. 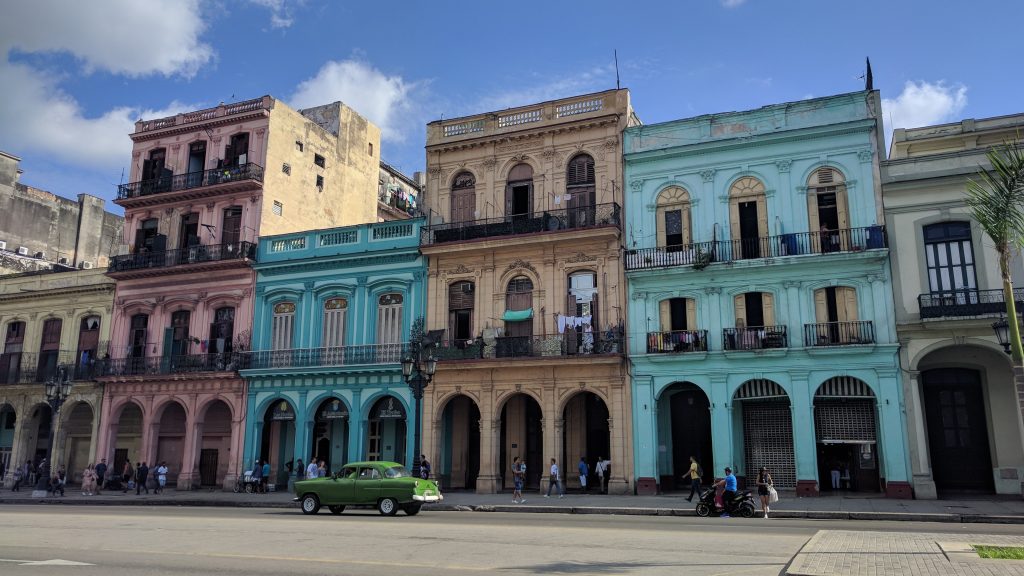 We spent most of our two and a half days there wandering through Habana Vieja or Old Havana but also managed to fit in a fair number of attractions. It’s an easily walkable old city and even Centro Habana is easy to get to on foot. You could walk to Vedado but we compromised by getting a cab out to the furthest place we wanted to go and then walked our way back to the old town where we were based in another gorgeous Casa Particular, Casa Aurora y Julio. This casa was just like staying in someone’s spare room and the hosts were the most friendly hosts with the casa in an easy walkable location from the main squares of Habana Vieja. Could not recommend enough. 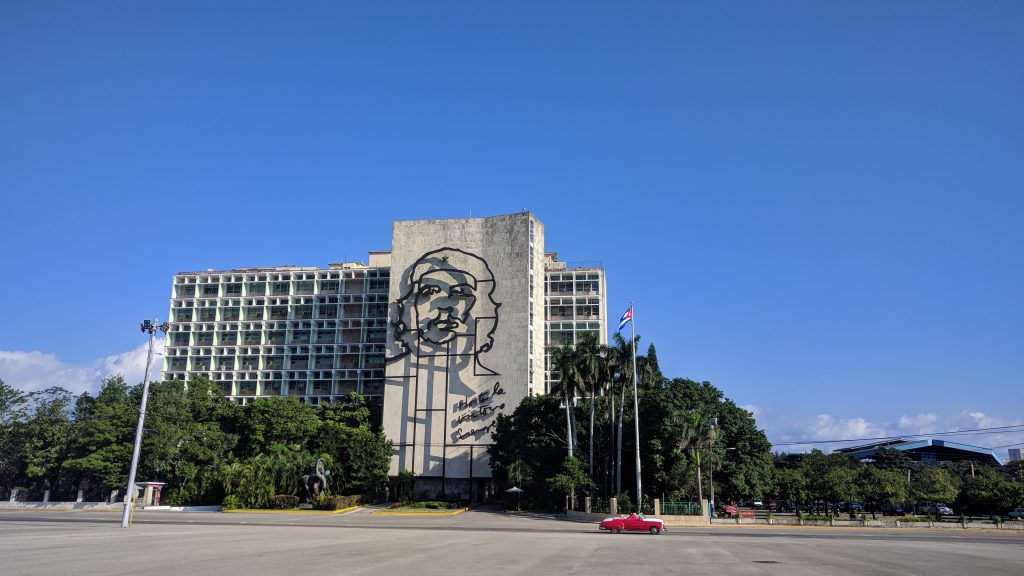 – Plaza de la Revolucion – Iconic Revolution Square in Havana, the one with the huge metal Che Guevara on the side of a building. You can’t miss seeing this and the partner building with Camilo Cienfuegos. Get there early and you’ll end up with photo’s with no-one in them and you won’t cook in the sun!

– Centro Habana – the bit of Havana that the locals actually live in. Beautiful in its dilapidated state but also fascinating to see the resilience of how people survive. It’s obviously still a country with economic problems but seeing grocery stores, proper butchers, tiny front room bars and day to day life is fascinating 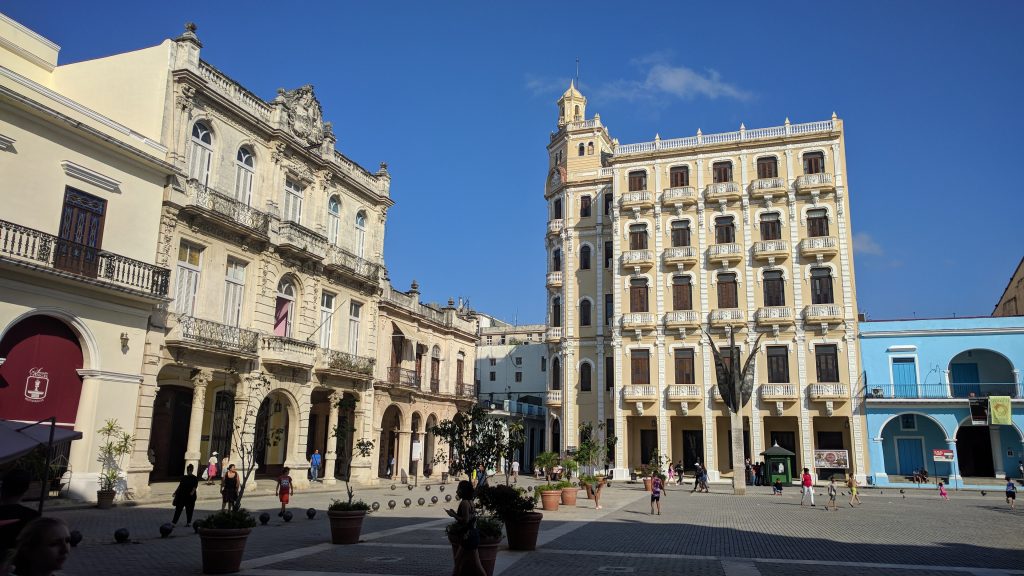 – Plaza Vieja – in my opinion the prettiest old square in Habana Vieja, a complete mix of architecture from colonial Spanish to Art Nouveau and everything in between. Oh and it has a micro brewery and the most amazing tiny pizza restaurant, Don Julio. Perfect for a super cheap meal or snack

– Museo de la Revolucion – fascinating museum charting the most recent event in Cuba’s history, the revolution and everything that followed. Interesting exhibition with artefacts and vehicles from the revolution through to modern day Cuba

– Castillo de Los Tres Reyes Del Morro – an older piece of Havana’s history, the castle that guards the entry to the harbour. Gives great views back across the water to the old town and all the way down the sea defence road, The Malecon. The castle is interesting for a wander around itself but it also houses the studio of artist Duvier de Dago Fernandez which is fascinating and filled with installations which come to life under blacklight

– Taller Experimental de Grafica – down a tiny little road off of the Plaza de la Catedral is this etching and printing studio. Fascinating for a wander round or to invest in an original piece of Cuban art you can see being printed before your eyes

– Hotel Inglaterra – a must visit in Havana, not to stay at or drink at but just for the lineup of old cars outside. This is where we picked up our hour tour as well. Yes it’s touristy but you really can’t leave Havana without a trip in an open top car 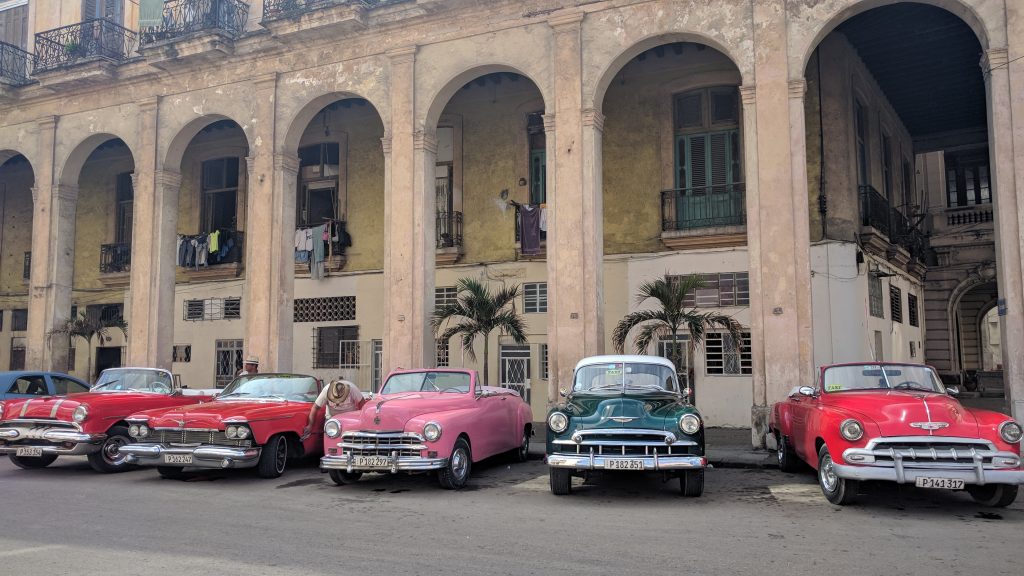 – Obispo – the main drag through the old town peppered with tiny little souvenir shops, often just on the staircase of a townhouse, bars and restaurants. Worth bar hopping during the day and evening or if sheltering from torrential tropical rain like we had to on our last day

– El Capitolio – worth seeing purely for its scale. Based on the Capitol Building in Washington DC, Cuban’s will proudly tell you its marginally taller and it does look huge. Now housing the Cuban Academy of Sciences and opposite the Parque Central and just down the Hotel Inglaterra it’s a great stop to look at between Habana Vieja and Centro Habana 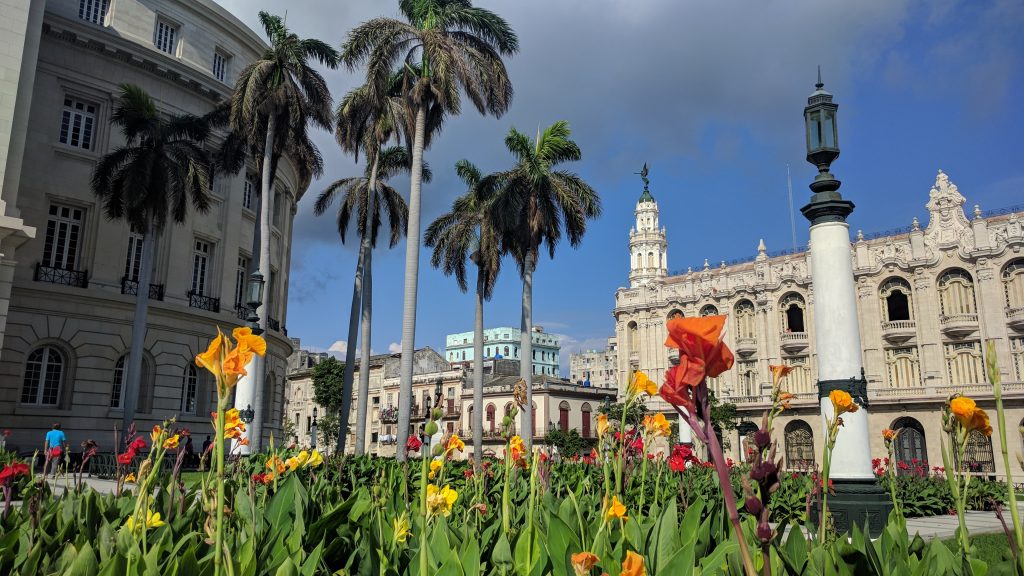 Cuba gets a bad rep on the internet as somewhere that’s difficult to travel through with no internet access, riddled with potholes it may be but it’s full of the most amazing, friendly people only too happy to share stories, recommendations or just a hello with you and the energy is infectious. And did we find the lack of internet a problem? Not at all, most towns have a hotspot in a town square but it means you only log on when you have to. So you might not detox your liver in Cuba but you can definitely digital detox. How can you not fall in with a place so colourful, optimistic and full of mojitos?

Just a little insight into our time in Cuba, if you have any questions or comments just let me know below