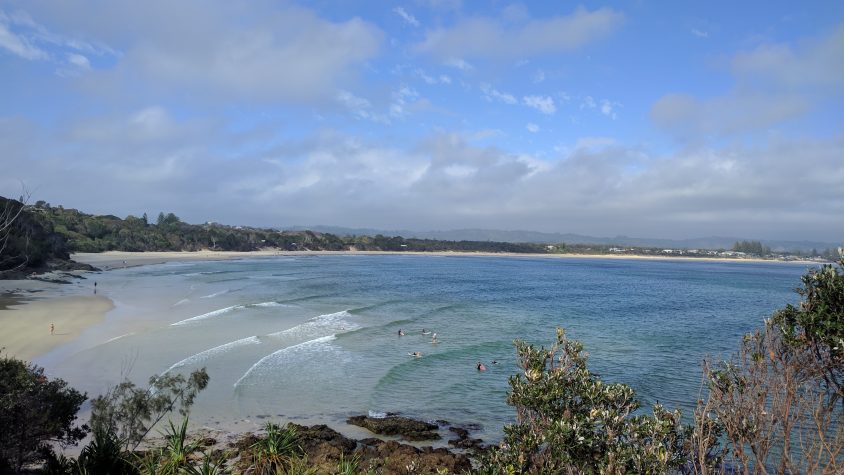 I guess I always knew that I’d love Byron Bay, I love the sea, I’m a hippy at heart and my instagram feed is just filled with girls who live and work there but I wasn’t really prepared for how instantly at home I felt. My first wander down the streets towards the sea and I could feel myself settle, it was the weirdest thing. The coastline along this bit of Australia is just stunning, wide sandy beaches, soft waves with the odd surfer playing around and beautiful cliffs of greys and golds.

The town itself is an interesting mixture of old school hippies, backpackers bars and smart boutiques, an interesting mixture which helps to give the town a buzz but I do wish that I’d been able to experience it 20-30 years ago when it must have just been a hive of hippy alternative culture. There’s still a bit of that vibe around though, there’s plenty of barefoot walking, patchouli in the air and a guy who I saw everyday hanging out on a street corner hula hooping while shaking pineapple maracas. He must have been in his 70’s so my guess is he’s been doing that since the sixties! There’s also music everywhere, all day. Everywhere you turn there’s someone busking, normally pretty good, and all the bars and pubs have live music every night. I saw an amazing blues rock and roll band at a bar call The Railway Friendly Bar on my first night, by the amazing name Frank Sultana and The Sinister Kids, and it was one of the most fun nights for a long time. Cheap wine, new friends and plenty of dancing. The bar is in the old railway station and has a huge outdoor area so well worth checking out if you’re in Byron. 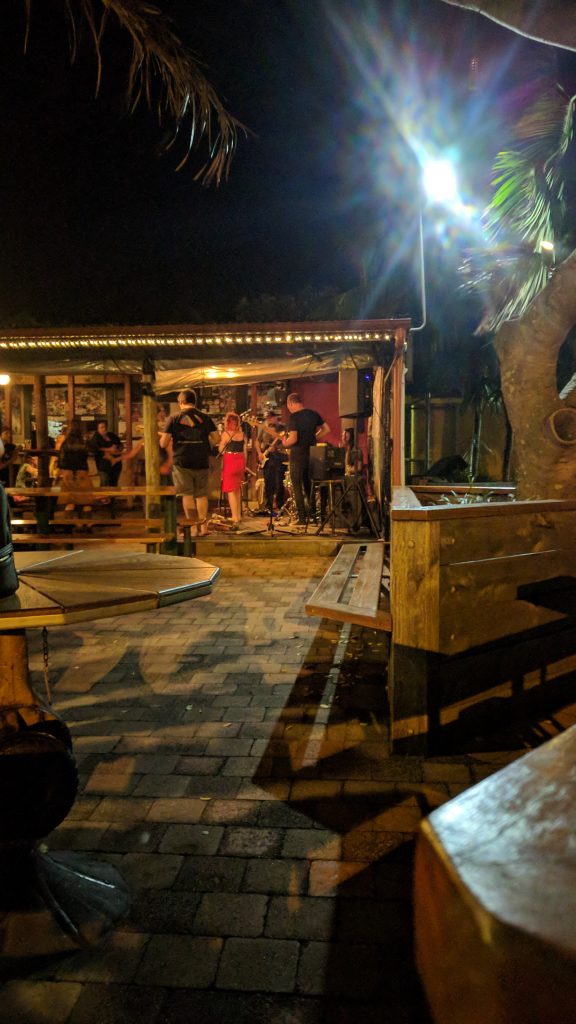 One of the main things I wanted to achieve in Byron was visiting the Spell and the Gypsy Collective store. As sad as it is I am a huge fan of this brand and have quite a few pieces bought online which I adore so a visit to the actual store was a necessity. The store was so busy and had such a good buzz because a new collection had literally launched the day before. Shopping in the store though I got to try on everything I wanted from the collection and managed to nab one of the last pieces of a dress that I’d had my eye on and had sold out online the day before! Shopping win! The rest of the shopping scene in Byron is a mixture of chain stores, individual boutiques and lots of Indian style hippy tourist catching stuff. Having been to actual India it was so funny to see how much harem pants you can buy in Pushkar for 200 Rupees were selling for! Maybe theres a business plan there in importing Indian goods?!?! I also had a wander around the farmers market which was filled with gorgeous produce, honey and things such as homemade soap. It was so lovely to see locals properly stocking up for the week here and not just using it as an event to wander around with a friend. This epitomised the real sustainable heart of Byron, amongst the backpackers and trinkets I think there is still a really strong sustainable community harking back to the hippies who called Byron their home in the sixties. 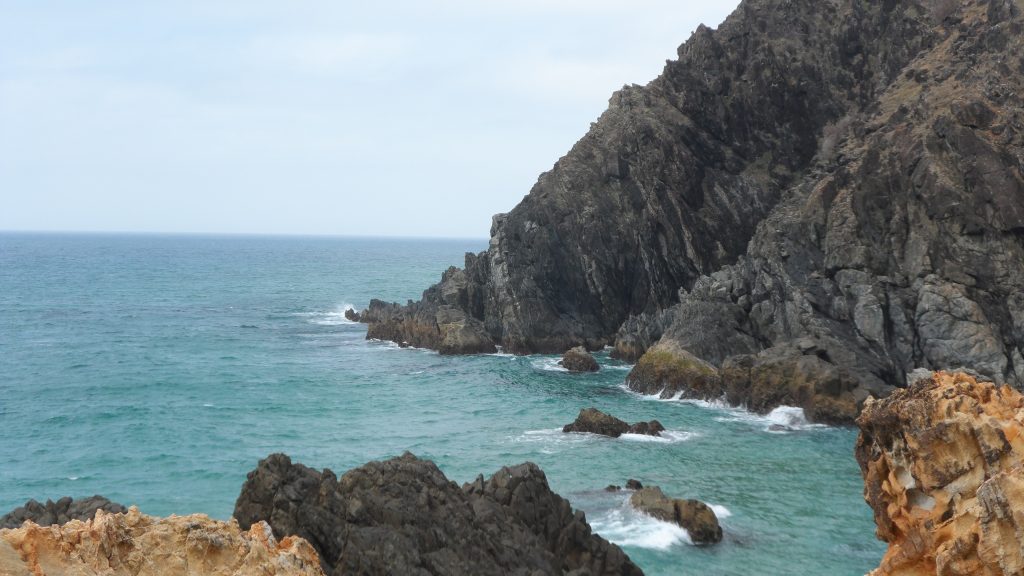 The town wasn’t the main reason I fell in love with Byron Bay though. It was the scenery, everywhere you look along the coastline it’s gorgeous. Bay after bay sheltered by rocks and edged by forest. Secret bays you can only reach by foot where you’ll probably be entirely by yourself. Outcrops of rock you can sit on and watch humpbacks swimming past and breaching and entire families of dolphins passing by you. As someone who is at her happiest when the ocean is spread out in front of me this was just heaven. On my third day in Byron I decided to do the walk along the coast to the Cape Byron Lighthouse. Approximately 5km from where I was staying it was supposed to take me two hours…. it took me five hours… Not because it was difficult or I had some horrendous accident, just there were too many gorgeous beaches to stop off at and swim at and views to take in. The walk takes you past Clarkes Beach, Captain Cook Lookout, The Pass, Watego’s Beach, Little Watego’s and Tallow Beach. Out of these, in one morning, I swam at The Pass, Watego’s and Little Watego’s, heading back to The Pass once I’d eventually completed the walk! Having Little Watego’s beach to myself that morning and swimming the surf was an absolute dream and I can’ even imagine what it’s like having this on your doorstep! 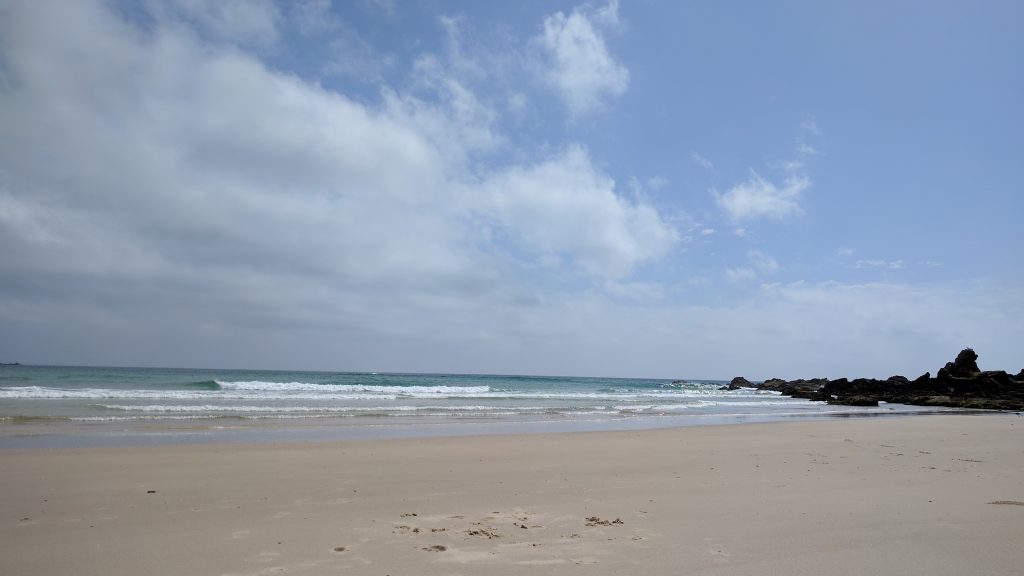 Little Watego’s entirely to myself

Edging Little Watego’s is a cluster of rocks which is Cape Byron, the most easterly point of Australia. Here I found a little clump of rocks which I was naturally going to use as a platform for some yoga pictures but before I could even set up my tripod something caught the corner of my eye, condensation blowing upwards from the sea and then the gorgeous curve of the back of a humpback followed by a smaller curve behind it, a mother and calf on their migration to Antarctica. I sat on these rocks for probably an hour just staring out to sea and saw at least six different mother and calf groups go past, various breaches and tail slaps from both mum and baby and two pods of dolphins swimming in the opposite direction. I have been obsessed with cetaceans my whole life so I’m not ashamed to admit I spent the majority of this hour fighting back tears, so beautiful. 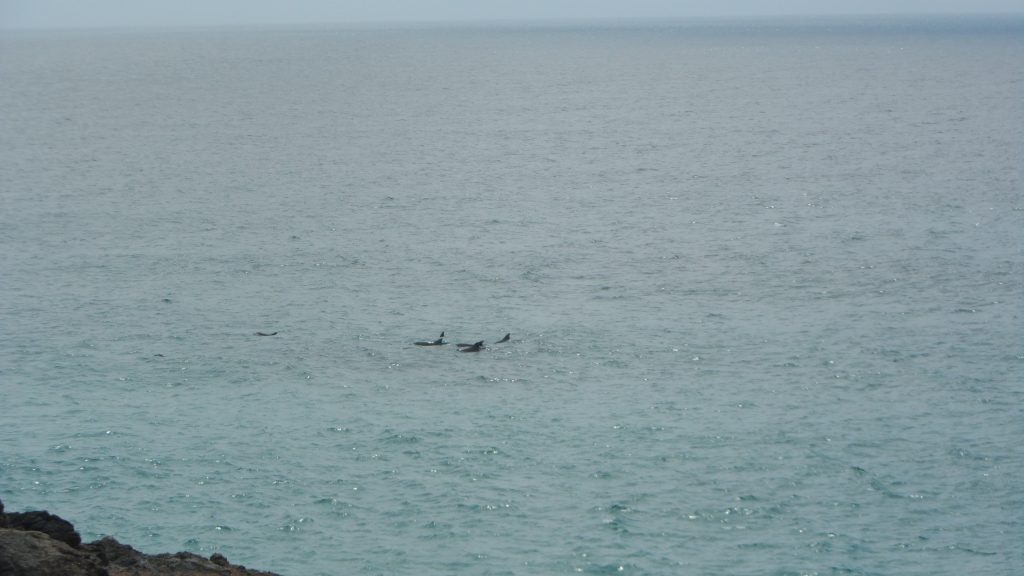 The coastal walk itself is a boardwalk hugging the cliffs with plenty of steep inclines and staircases used by both tourists and locals as an exercise run. Following on from Little Watego’s the path curves further around the coastline and up to Cape Byron Lighthouse, the most easterly building in Australia. Built in 1901 the view from it is just spectacular whether across the sea, down to Tallow Beach or back towards town. Well worth the walk for the view or you can just drive up to the lighthouse if you’re short on time or feeling lazy! Keep a look out for whales here too as I saw more from the look out here. From the lighthouse the official path then curves back down the hill and through the forest affording glimpses of the gorgeous 7km long Tallow Beach before dropping back to the end of Clarkes Beach and the end of the trail. Everyone will recommend this walk to you if you’re going to Byron but I wholeheartedly second that with advice to be wearing your swimwear and carrying a good book so you can make the most of every beach you pass! 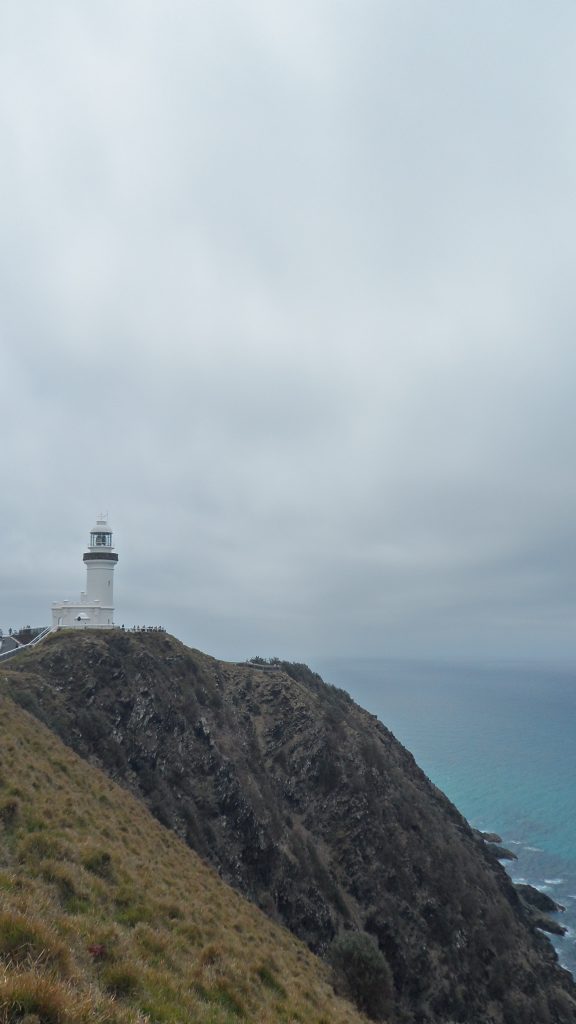 I could continue to wax lyrical about beaches and whales and paisley print dresses but instead I’ll give a quick lowdown on the beaches I loved and the places I ate and drank!

Orgasmic Food – As put by my lovely AirBnb host, only Byron Bay could have a falafel restaurant named Orgasmic! On Bay Lane, off of Jonson Street, it’s surrounded by other world cuisines but the falafel and houmous here was amazing! They do a complete ,mixture of snacks or platters but all freshly made with fluffy warm pitta breads, great for a cheap dinner 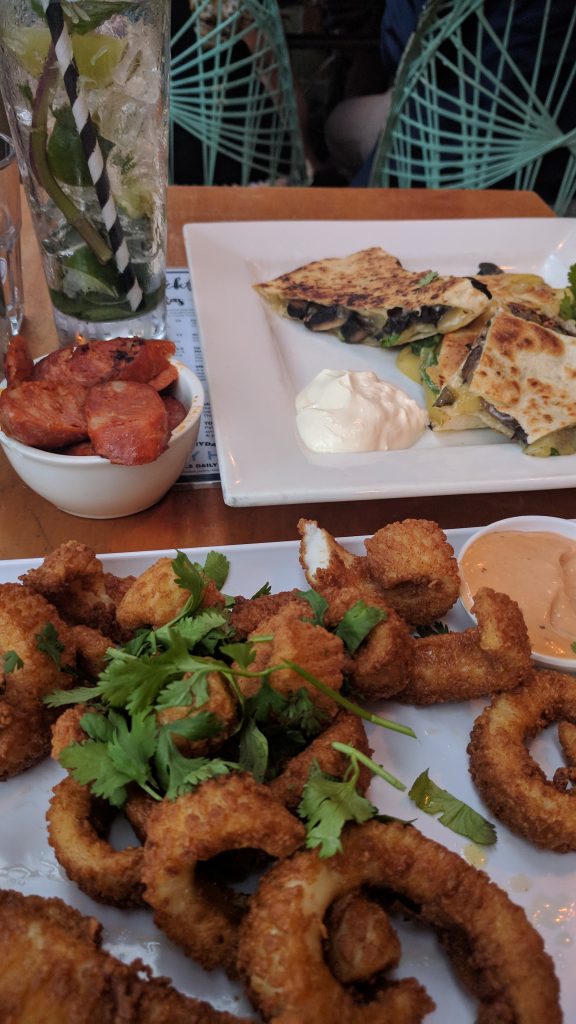 So much but delicious food!

Miss Margarita – Again on Jonson Street a bustling mexican cantina where you will have to wait for a table but get there during happy hour for a margarita while you wait! I had the biggest pile of salt and pepper squid and quesadilla’s and it was amazing! Cool decor with upstairs or street seating, perfect for post beach food 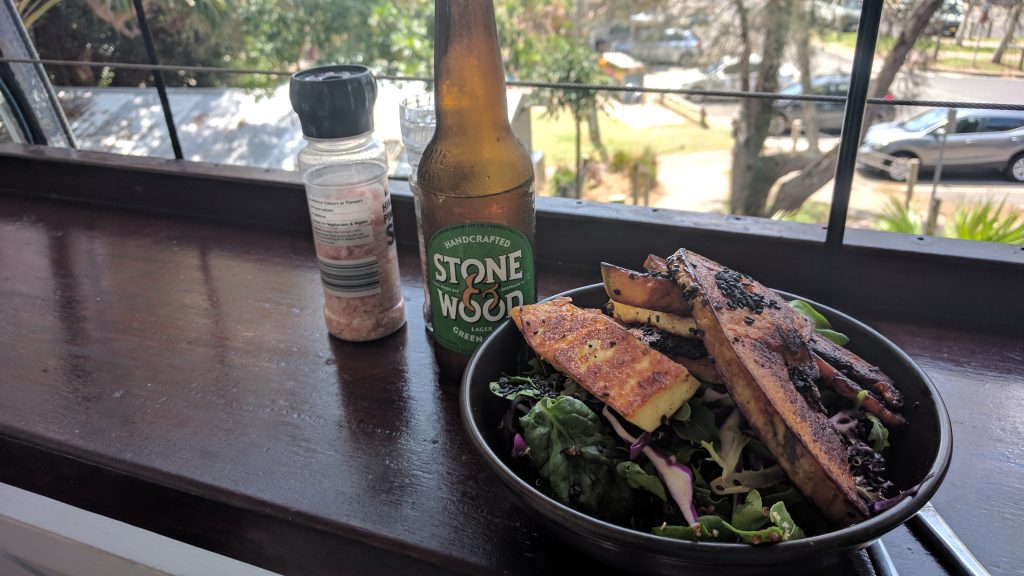 The Pass Cafe – Just up from the beach at The Pass this little cafe is great for a coffee but also has a lovely terrace for a salads and sandwiches. I had a gorgeous pumpkin and halloumi salad washed down with a cold local beer after my epic lighthouse walk and before an afternoon on the beach!

Pighouse Flicks – I was lucky enough to be in Byron during the Film Festival so went along to the little cinema to see Blue, all about the state of our oceans but this gorgeous independent cinema would be worth a visit even while the film festival isn’t on. It’s part of the Byron Bay Brewery complex so you can go for a couple of beers before seeing an arthouse film, perfect evening if you ask me. Seats are either sofa like benches or beanbags! More of this needed in cinemas!

Little Watego’s Beach – Tiny secluded bay only accessible by foot, well worth the walk as you’ll probably get it to yourself. Quite shallow in parts so good for a wade depending on the tide, just don’t go beyond the rocks into the current otherwise you’ll be off to Antarctica with the whales! 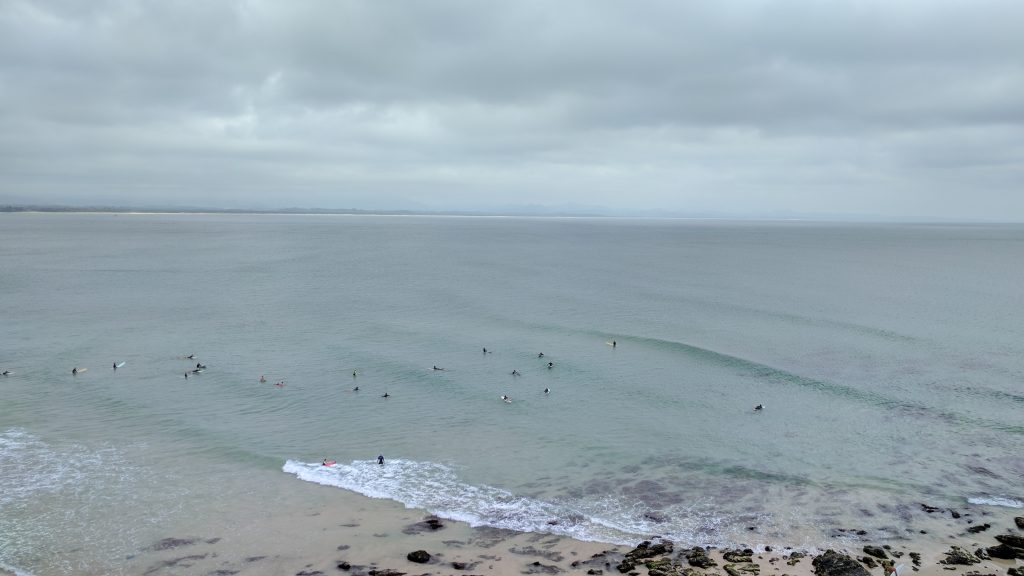 The Pass – Great bay at either low or high tide with the Fishermans Lookout at one end which can be climbed for views back to the town and good surf if your into that or just like watching like me! Really enjoyed my swim here and spotted dolphins not far out while swimming too! My favourite place to while away an afternoon

Can you tell I loved it there? Sorry for the essay! I would so recommend it though if you are travelling through Australia. It epitomises the beach lifestyle and has such a lovely vibe. Now to figure out how to orchestrate a move here…