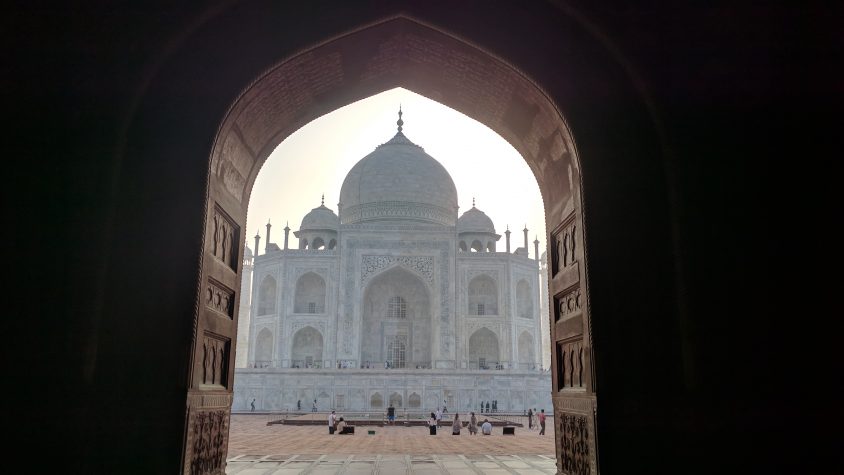 The opportunity to visit Ranthambore was one of my main reasons to choose the tour that I did with G Adventures. The possibility of seeing tigers in the wild was an opportunity too good to miss. Ranthambore Park is home to fifty five tigers in its estate and is one of the best places to catch a glimpse in the wild. There is also a stunning fort which is derelict in places but this adds to its charm. 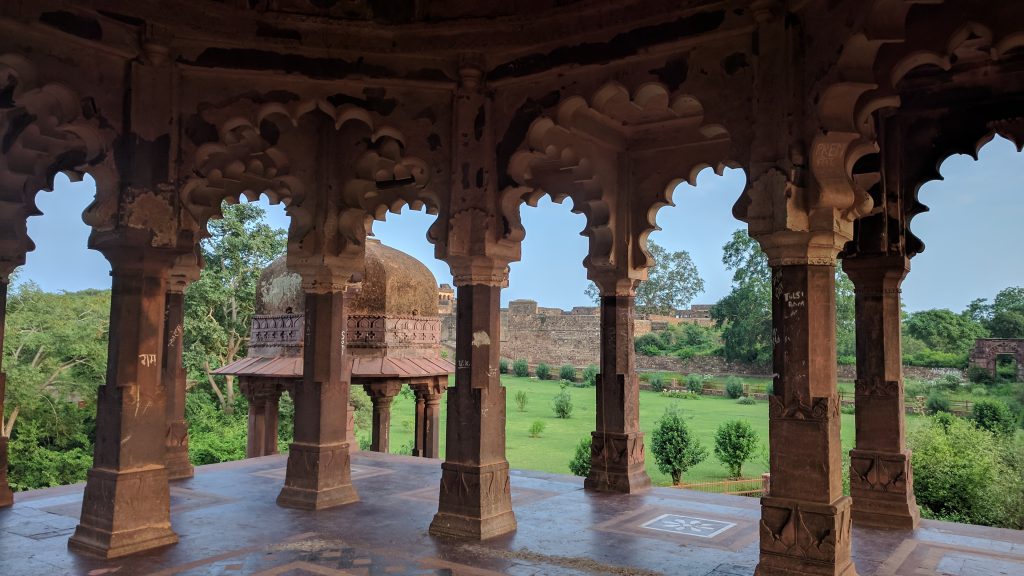 Ranthambore fort really reminded me of King Louis’ hideout in The Jungle Book, domed roofs of temples rising out of the jungle, steps leading to nowhere and walls full of arches for monkeys to hide in. There were plenty of monkeys around the temple and we were reminded constantly not to smile at them as showing your teeth is a sign of aggression and after seeing a monkey charging someone in Jojowar I definitely didn’t want that to be me! The temple is on top of the ridge in Rathambore National Park giving you a birds eye view of the surrounding hills and lakes, all our eyes desperately searching for tigers! Tigers were not spotted from above that evening but using a zoom lens we did manage to see a very small warthog! 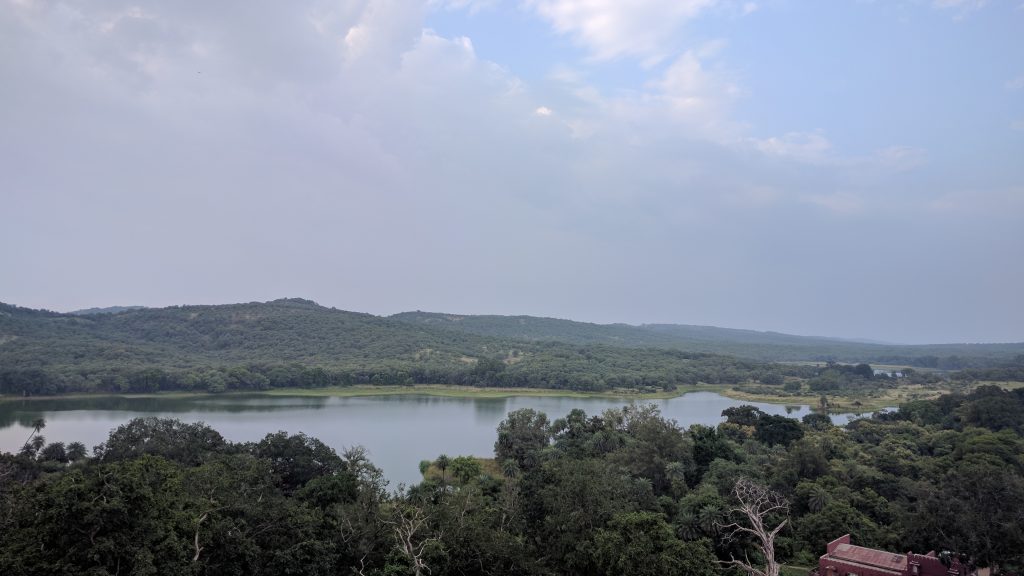 Wandering through the walls of the old palace we kept on coming across little piles of stones which were definitely man made and not just random occurrences. The fort is still site of a working temple and these piles of stones are left by worshippers as an offering asking for a house of their own for them and their family. Seeing these littered across the sight really brought home to me how lucky we are in the UK and the rest of the western world to take this for granted. 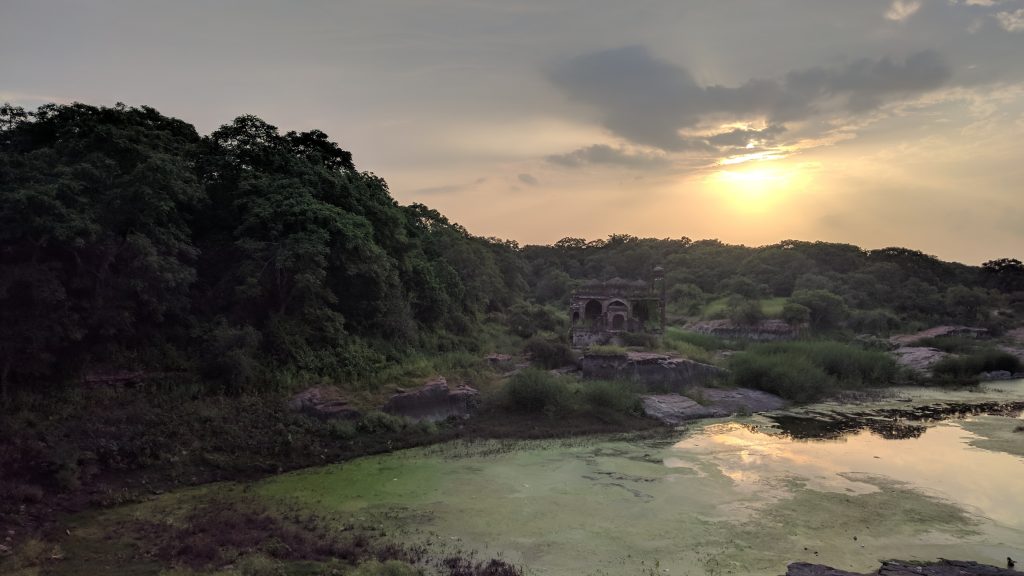 We visited the fort in the evening in order to catch the sunset and unlike my slightly pitiful sunrise experience in Pushkar this one was beautiful and well worth the sweaty walk up to the fort and the slightly scary walk back. No one had brought a torch with them and obviously being sunset it began to get dark. Not that scary you would think but remember we were in a park home to tigers, leopards and bears not to mention the monkeys with very large teeth that we’d seen earlier! Needless to say when we’d made it to the bottom of the steps and back to our jeep we were very happy! And then the happiness continued, on the way back to the hotel we made a stop at an ice cream parlour! Delicious cold ice cream on a sticky jungle evening being eaten in the back of an open top jeep. Being in India I didn’t want to get a flavour I could get at home, so I got saffron and pistachio. Delicious! Definitely one to try in the ice cream maker at home. 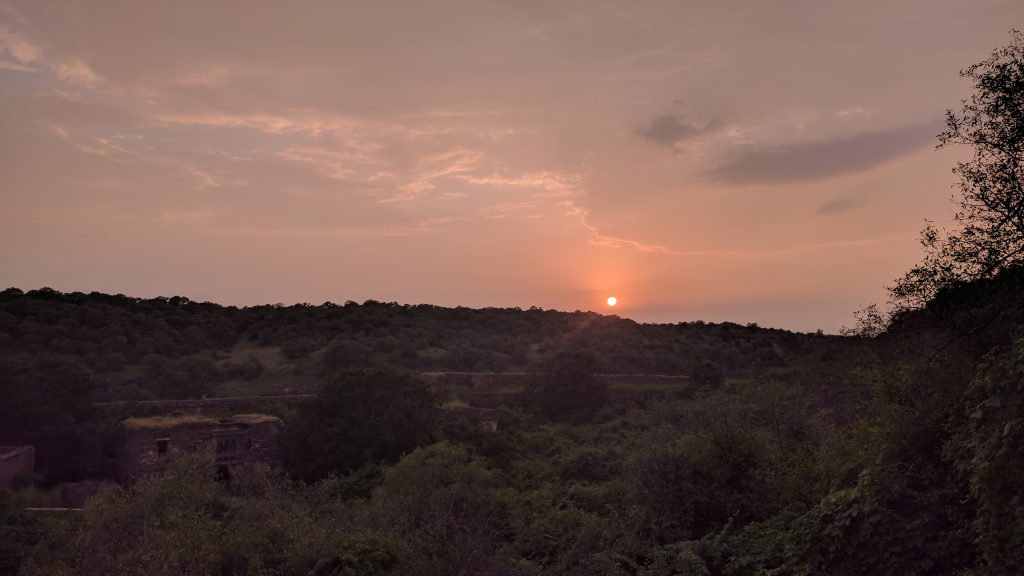 The next morning was another early start, driving to the the reserve in the dark to start our safari as the light began to enter the sky. It was a gorgeous morning, barely a cloud in the sky and the excitement amongst us all was palpable. We were booked in for a three hour safari around dawn when tigers should be waking and moving from where they’ve spent the night before the day gets too hot.This is where I had really hoped to be able to post amazing pictures of my tiger encounter but unfortunately our luck just wasn’t there for the morning or afternoon safari that we did. We saw prints and plenty of tiger food (antelope and deer!) but unfortunately it just wasn’t our day. I am disappointed but the thing with going on any sort of animal watching is its all on their terms and I’d rather not see one than know that the encounter has been engineered in order to guarantee a sighting. The scenery within the park though was fantastic and we saw lots of bird life including a kingfisher and peacocks as well as the aforementioned tiger food! 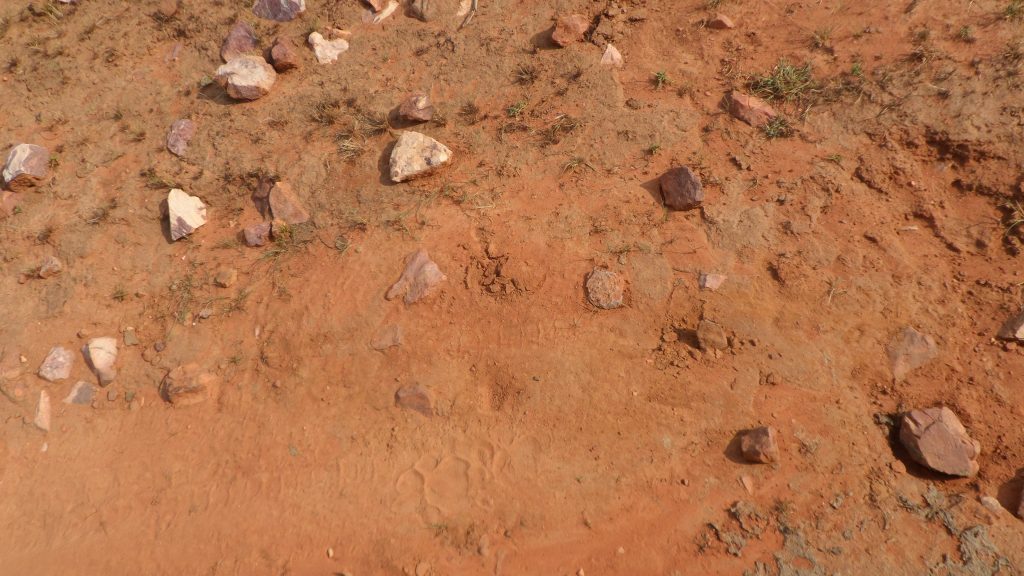 the closest we got to a tiger! 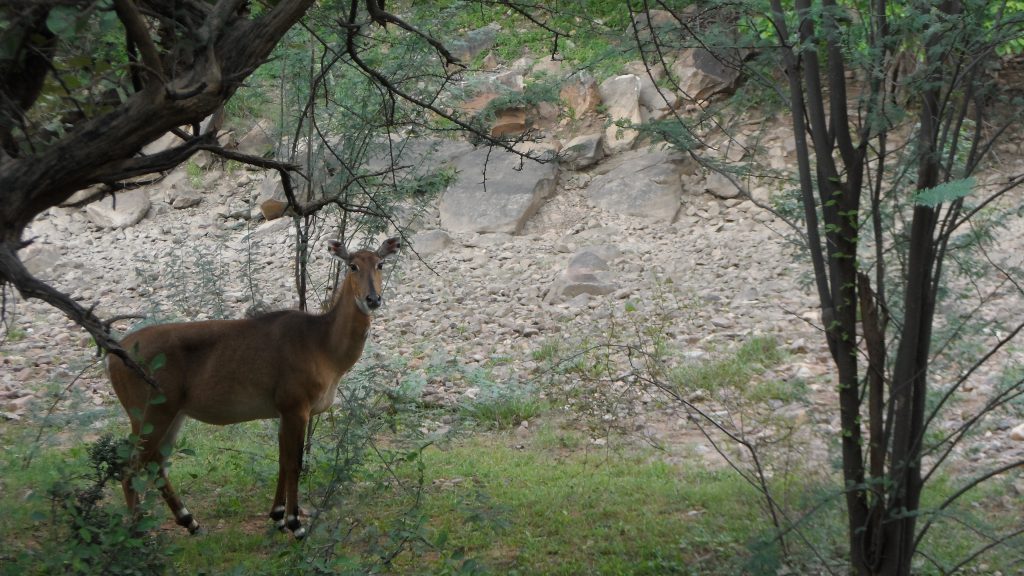 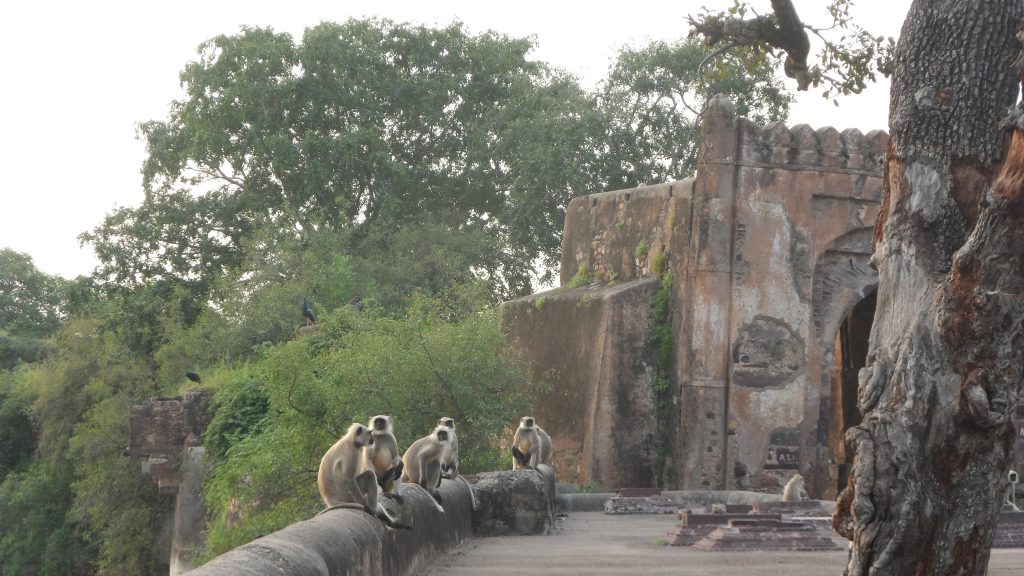 Our next and final stop on the Rajasthan Adventures tour was Agra, to see the Taj Mahal! Something that would definitely be where it was supposed to be unlike the tigers! It was quite a long drive from Ranthambore to Agra so we headed off in the car again, roof rack laden with bags breaking the journey with a pitstop at a roadside restaurant for the largest samosa in the world. We also made a quick detour to the Chand Baori Step Well which is one of the deepest step wells in Rajasthan and has literally thousands of steps leading down to the waters edge. Although no longer in use as a step well it’s often featured in films and was most recently used in the Dark Knight Rises film as a prison. The engineering of all the steps and the beauty of the little summer palace above is just beautiful. Everything in Rajasthan, even if purely functional is beautifully decorated. 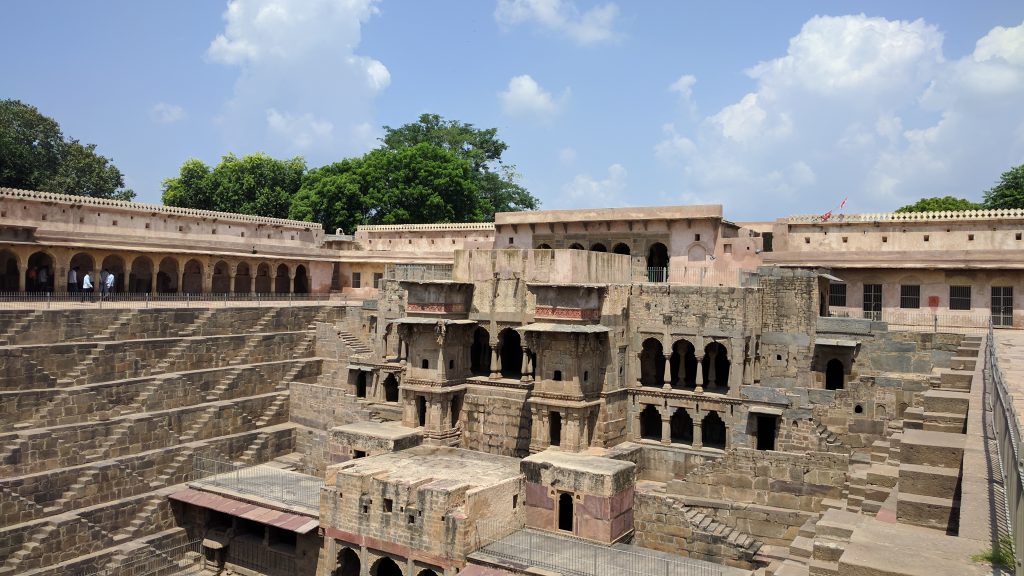 We pulled into Agra mid afternoon, all desperately trying to get a glance of the Taj, but couldn’t quite yet. Agra Fort was our sight seeing for that evening and it was yet another breathtaking fort which Rajasthan seems to be full of. Heavily fortified back in the day with a moat full of crocodiles, a terrace of lions and tigers, parapets of soldiers and a large rolling rock we had an easier time of getting inside the red sandstone walls. The palace itself is intricately decorated in a combination of Indian and Islamic motifs due to the mughal influence on India and it reminded me a lot of places I’ve visited in Morocco. There are other interesting elements to the architecture too, as one of the Kings started his own religion incorporating elements from all the religions so there are Stars of David and crucifixes hidden in the carvings too along with the Islamic, Buddhist and Hindu motifs. 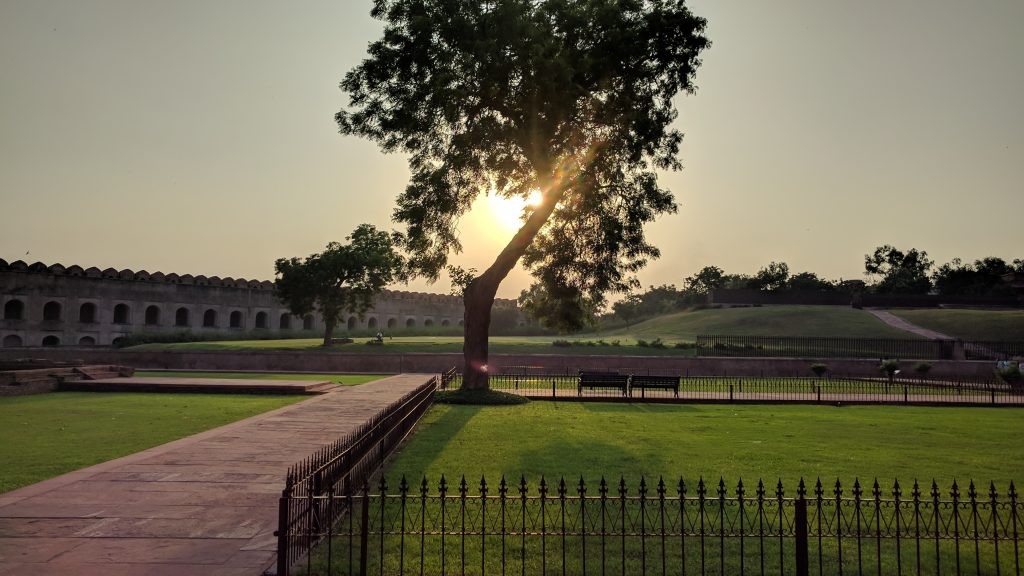 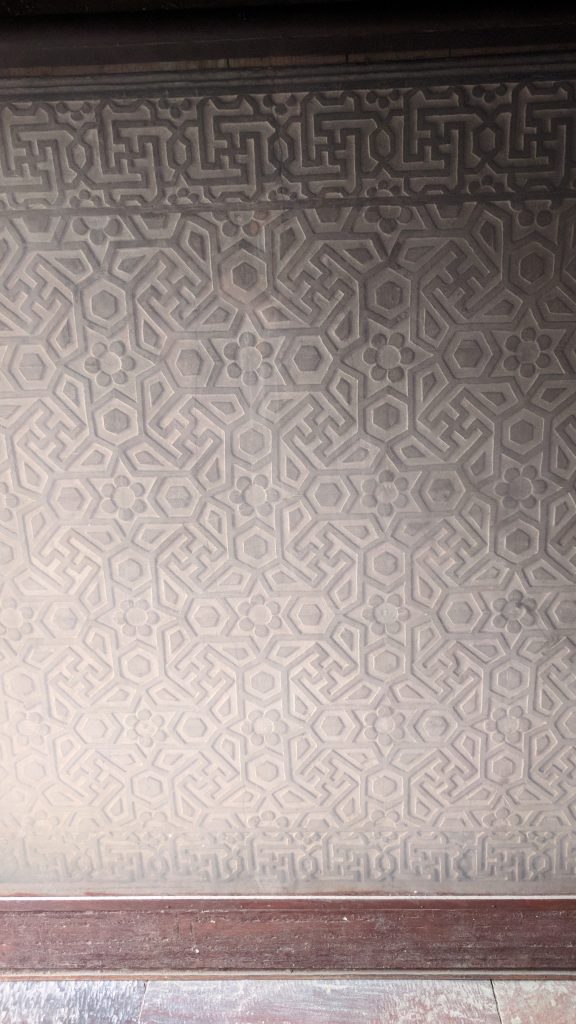 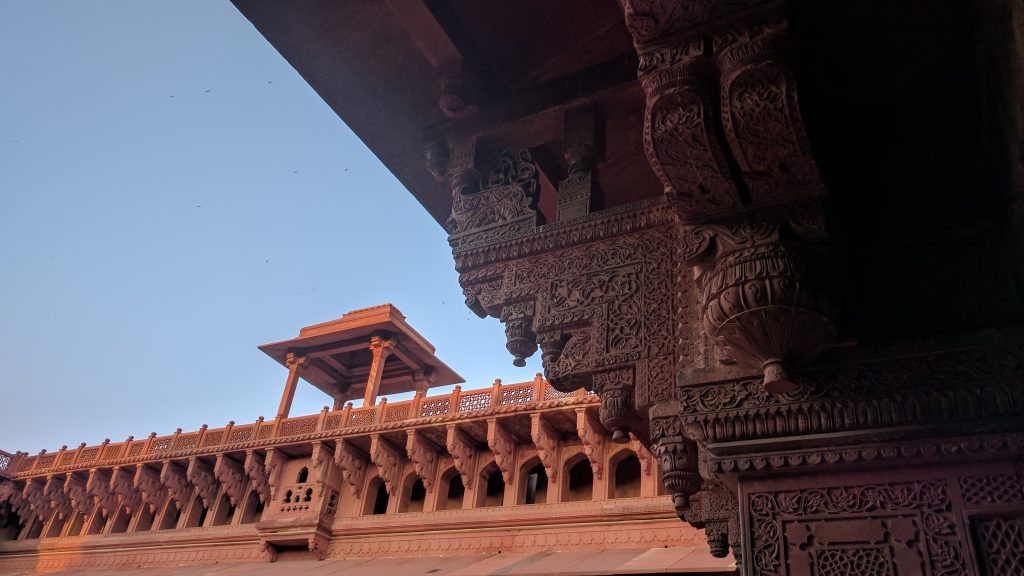 It was from one of the courtyards in the fort that I managed to get my first view of Taj Mahal, rising from the edge of the river, framed by one of the arches on the ramparts of the fort. In the evening sun it looked so white and majestic it was amazing. 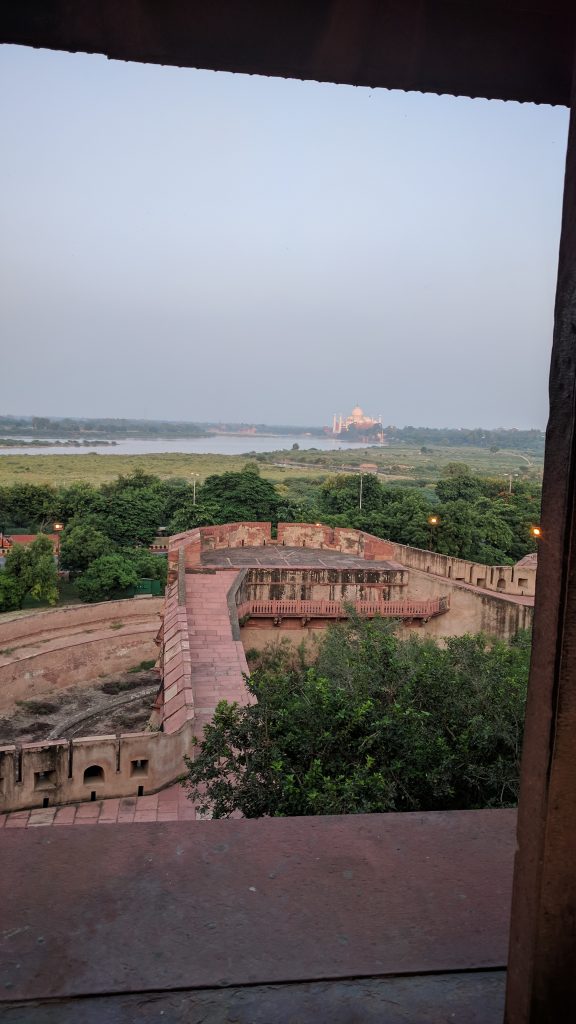 The same King that built the Taj was also responsible for the white marble internal courtyard to the fort as well, inclosing two rooms for his daughters, an entertaining room and at one time a personal vineyard. Interestingly the two rooms for his daughters look the same from the outside but one is made in marble and the other stone, painted to look like marble. Unlike most parents he wasn’t shy to express which was his favourite daughter!
Having had a glimpse of the Taj Mahal the day before I excitedly woke up at 4:45am the next morning to see it. Our plan was to be the first in the queue for when it opened at 5:50am and it worked. This meant we managed to get gorgeous photos of the Taj with no one else in them and got to see the beauty of the Taj while it was quiet. How busy it was when we left a couple of hours later made me really appreciate getting there early as you couldn’t move for people in the popular spots for photos. 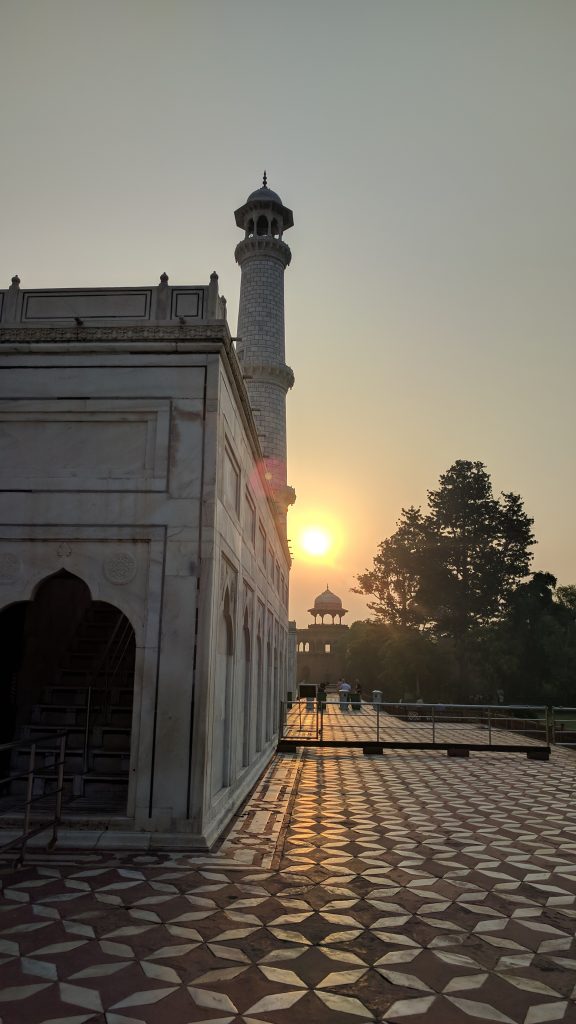 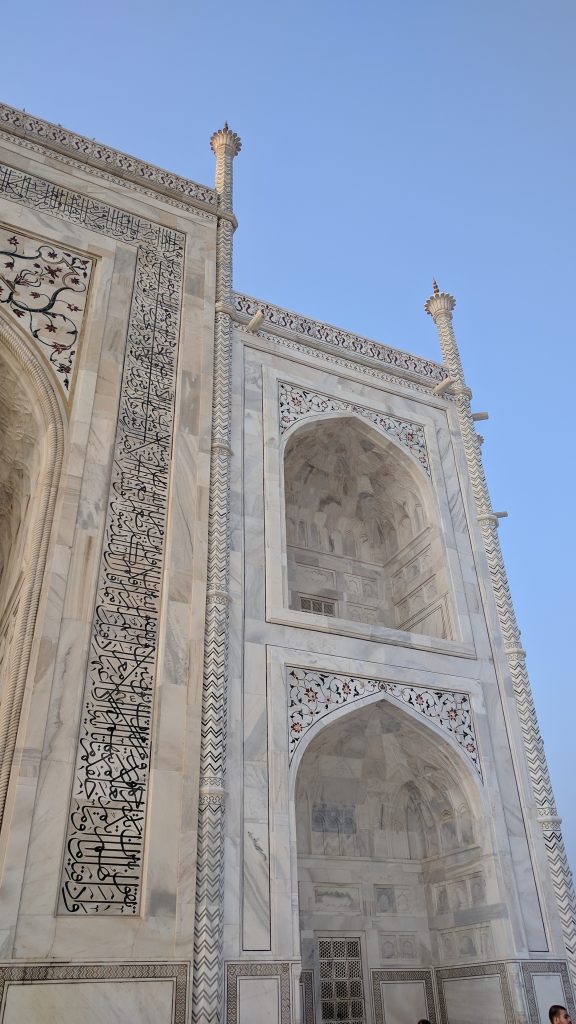 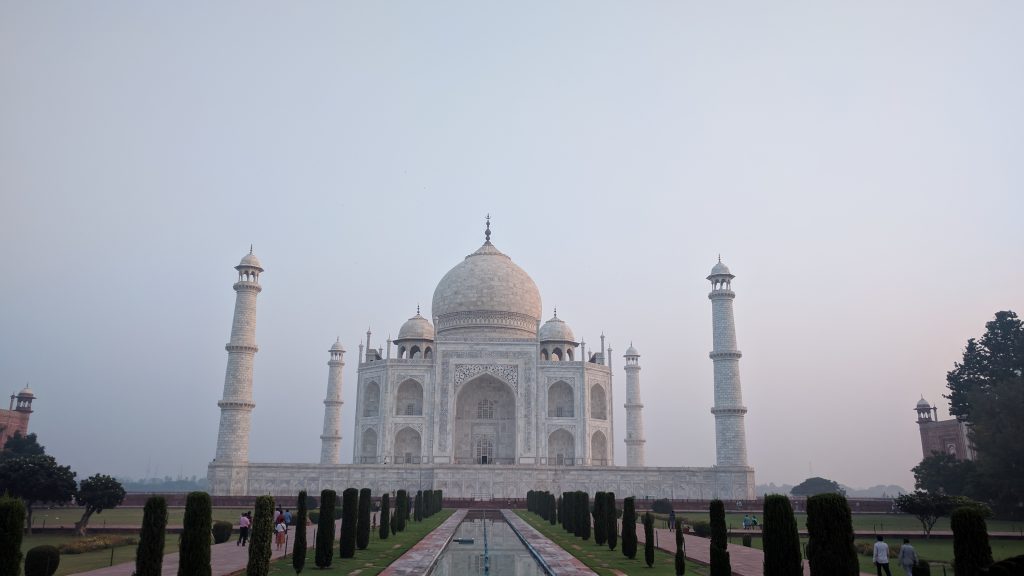 Its difficult to describe what visiting the Taj is like as it’s just so stunning both in its simplicty of form and intricacy of detail. The perfect symmetry is sublime, the subtle engineering of the columns leaning out so if there’s an earthquake they’ll fall away from the mausoleum is clever and the inlaid jewel detailing just breathtaking. It’s the perfect love story building from a King to his Queen.
The Taj visit brought our sightseeing itinerary to an end and all that remained was to head back to Delhi and have one final meal all together. For some of our group it was back to work, for me it was the chance to start my solo trip using Delhi as my gateway up to Rishikesh and two weeks of yoga. I can’t recommend enough starting your India exploration with a tour from someone like G Adventures. I loved it and found it such a good way to be introduced to Indian life, culture and travel. It takes the hassle out of having to organise things yourself and you meet the most incredible people!