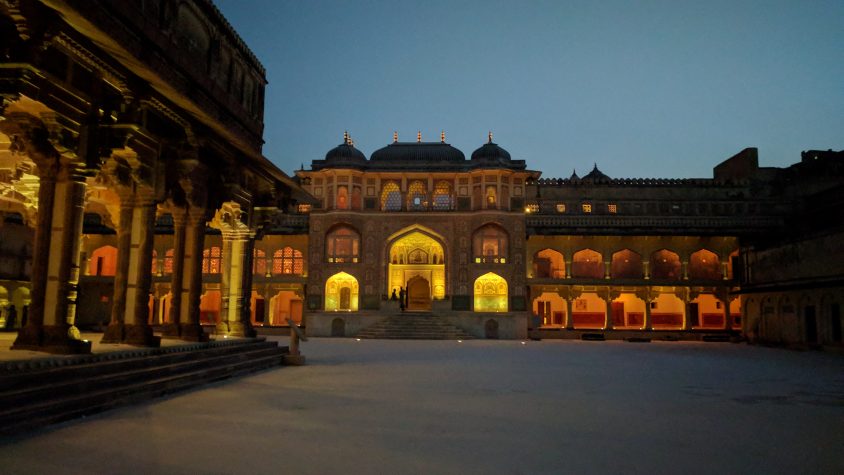 I really didn’t want to leave the sanctuary of Jojowar as quickly as we did as the pool and surroundings were so calm and relaxing but unfortunately it was back in the car and back along the bumpy country roads. The destination? Pushkar, one of the most holy cities in India. It has one of the few temples dedicated to Brahma, one of the trinity of most important gods and is set around a lake which is said to have appeared when Brahma dropped a lotus flower. It’s this mix of very religious and very hippy that Pushkar quite charming even if it seemed busy compared to Jojowar! 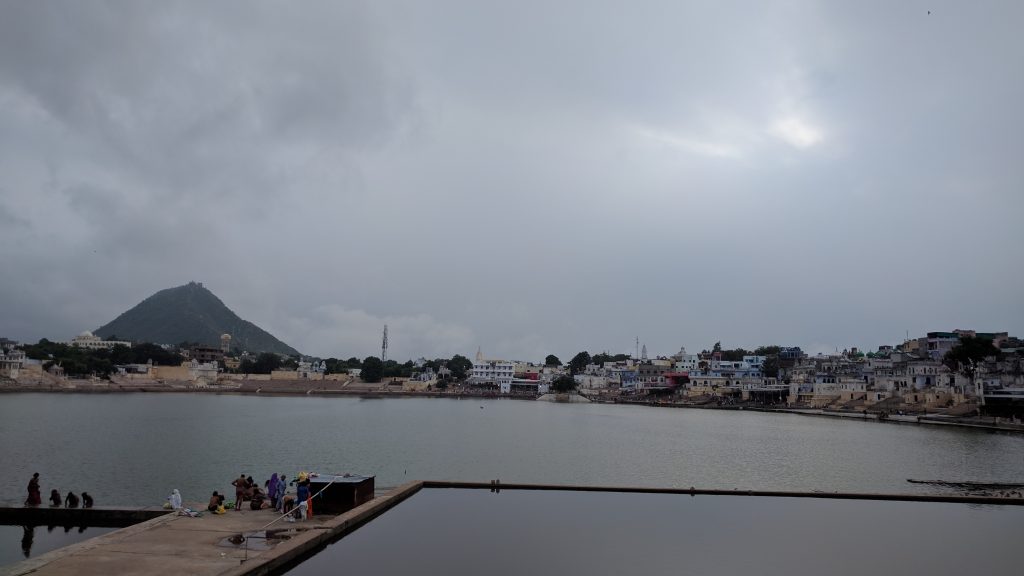 The lake is the site of many bathing ghats used by pilgrims at the end of their pilgrimage and it was on one of these ghats that I received my Pushkar passport… Not as scary or dodgy as it may seem this was a blessing carried out to bring good luck to my family and look after them which is traditionally performed in this location. To mark that you have been blessed a piece of red and yellow cord is tied around your wrist, the Pushkar Passport. This therefore means that no other priest will try to badger you to get your blessing done, one less person shouting at you in the street! It was such a beautiful thing to have done in Pushkar, chanting and offerings of rice and flower petals into the holy lake.
Dominating the skyline above the town are two temples on the top of hills and for some reason I decided on the first morning in Pushkar it would be a great idea to join the group who were climbing to the top of of hill for sunrise. Super early wake up call met and we set out with our torches, starting the hours walk to the bottom of the hill. I was already sweating by the time we got to to the bottom as even in the dark in India it’s warmer than the UK in summer! From afar the hill looked tall but from below in the dark all you could see was the odd light from the path all the way to the top and it looked even steeper. Luckily, or unluckily depending on your view, there are well constructed, if slippery, stairs all the way to the top which admittedly did just turn this walk into the longest stepper session ever. I was determined to complete it though and only stopped a few times with sweat pouring off my face in order to check the view and where the rest of my group were. At these stops though I was often over taken by barefooted women in saris and children who didn’t even have a bead of sweat anywhere near them which was a little off putting. After about an hour and a half climbing I was a sodden mess but had reached the top (there is photographic evidence but not on here!). Unfortunately although there was light climbing in the sky there was no beautiful sunrise but the view was still pretty special back down on to the town. 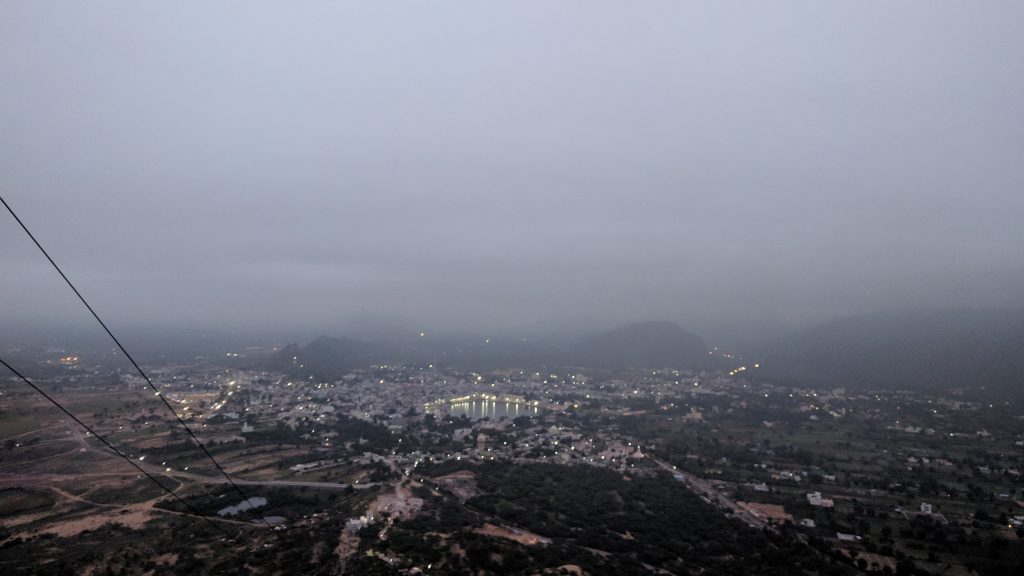 We’d had a debate with Shiv, our G Adventures CEO, about what time the cable car started running at dinner the previous night with the guy in restaurant saying 7:30am and Shiv adamant it was at 9am so once we saw someone balancing on the winding gear appearing to check it we were determined to wait for it to open. Out of the three of us who had climbed we all had only one good knee each so anything to stop going down all the stairs! We had to wait a lot of Indian five minutes (it’s a different length of time…) but we were the first on that cable car and it felt good to only look at the stairs!
The rest of the day in Pushkar was free until our camel safari in the evening so the girls and I went into town to explore some of the more hippy arts of this religious town and do some shopping. The main street through Pushkar is littered with shops and stalls selling everything under the sun. From hippy tie dye harem pants, to swords, toy guns and crystals. Be warned if you do go there’s a lot of the typical tourist stuff that you get at every street market in Thailand but amongst them there’s some gorgeous little finds. I was particularly chuffed with a stall of wooden block prints I found down a side street, all carved by the guy running the stall and his wife. One of the ones I bought had taken them 13 hours to do and it is just gorgeous!
I’ve never ridden a camel and can count on one hand the amount of times I’ve ridden a horse so to say I was a little apprehensive about our camel safari is an understatement. We were told to pick our camels, climb on and lean back and as it stands up you suddenly realise how tall a camel is! Also my hips are not the most open so straddling a camel and not naturally moving with its gait while holding onto the saddle for dear life was a combination for being uncomfortable to start off with. About 20 minutes into our hour long ride I began to get more comfortable but it was at this point my camel decided to eat at every opportunity and go down every hill on three legs. My mind obviously coming up with all the ways I could die in these situations! 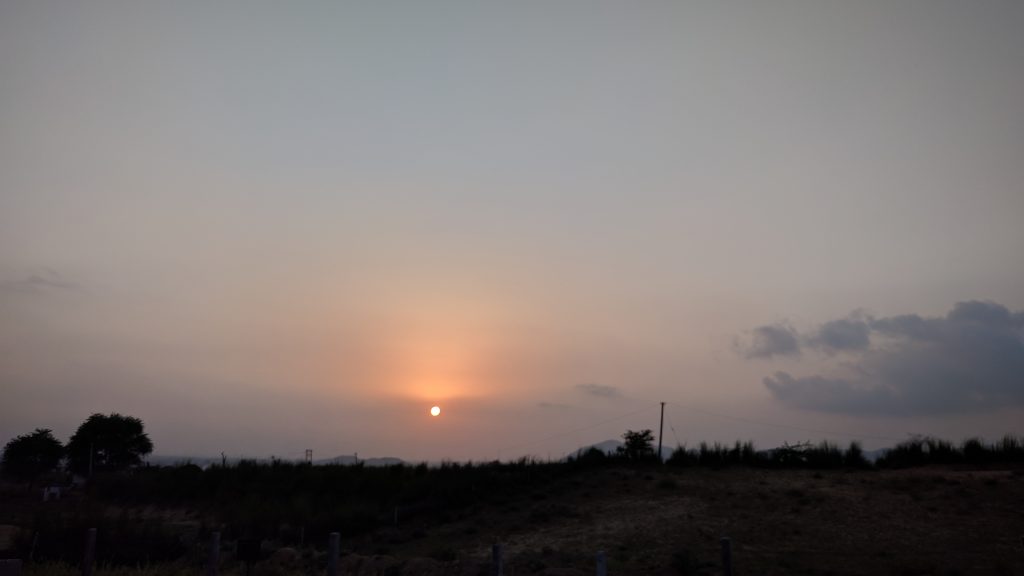 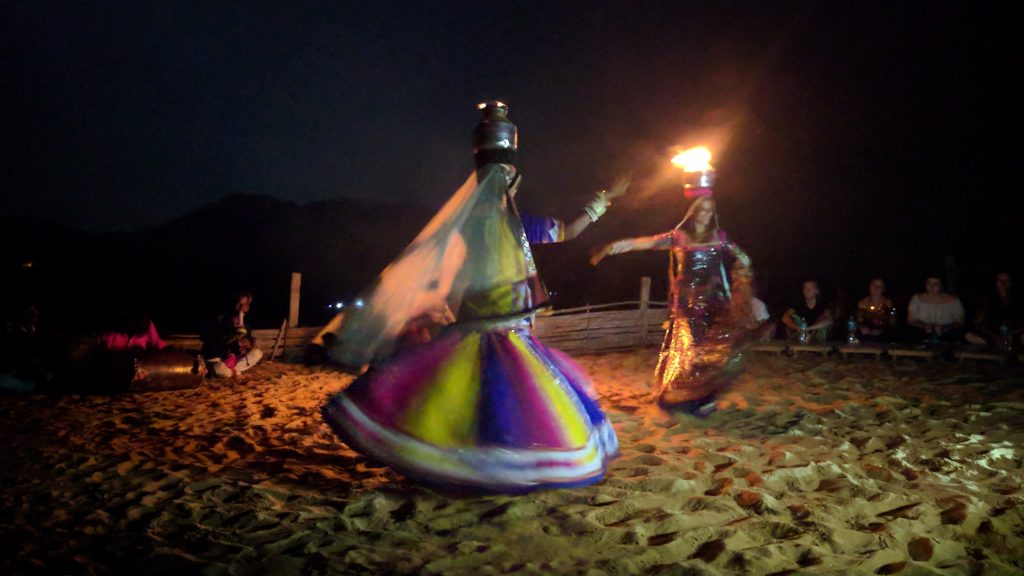 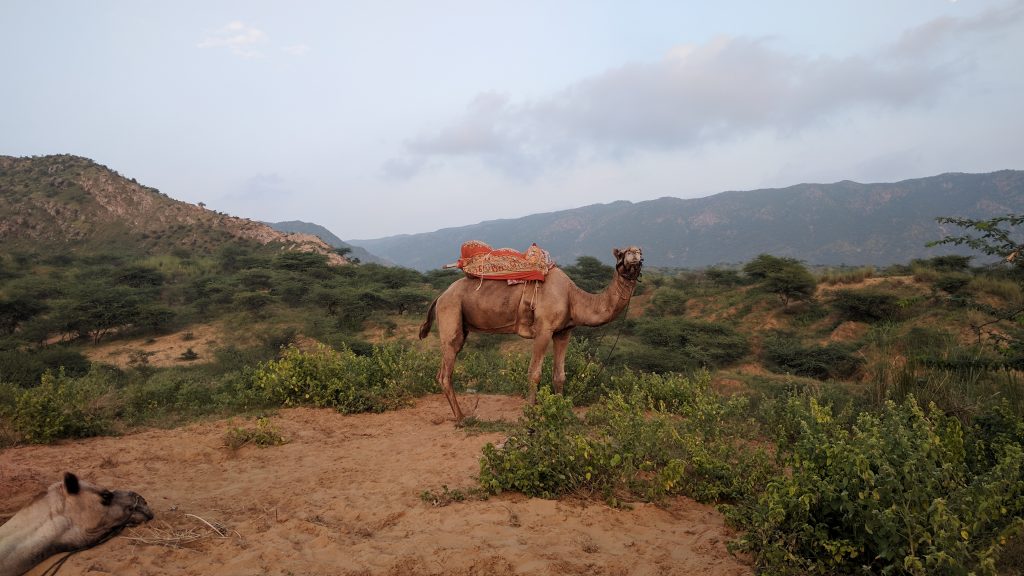 The aim of the camel safari though wasn’t to scare us, I don’t think, but to get us to our location in the sand dunes where were treated to dressing up, dance, magic and a lovely traditional meal. It was a fun night and we had a gorgeous view of the sunset, the full moon rising and the stars. The swirling sparkly skirts of the women dancing round the fire in the desert under a jet black sky was just magical.
After that evening it was time to hit the road and head to Jaipur. On first impressions I was quite disappointed by Jaipur it seemed very dirty even by Indian standards the the market we walked though was selling mainly cheap imported goods. How wrong I was on the shopping front as I found out to my detriment the next day! Firstly though it was evening entertainment time and that meant a Bollywood film. We went to see Baadshaho which was loosely based on the story of a princess in the 70s losing her fortune but it was basically a heist movie with added dance numbers! Even though it was all in Hindi I loved it. All the more so because the atmosphere in the cinema was amazing, so much whooping and hollering at exciting bits and when the leads came on. Definitely adds a new dimension to the cinema. 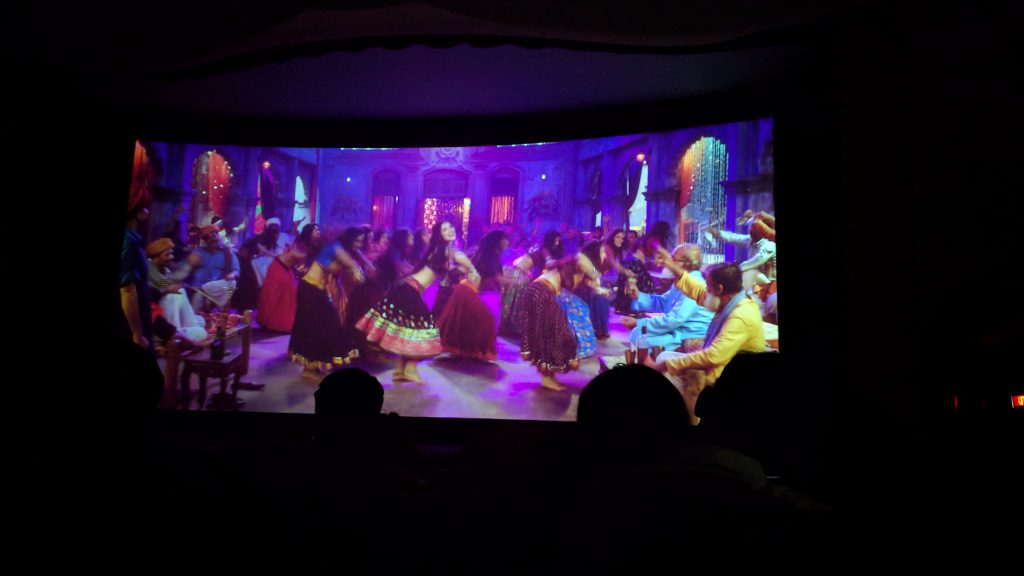 The City Palace of Jaipur has been turned into a museum and that’s where we went the next morning. Another gorgeous palace carved out of the pink terracotta sandstone that makes Jaipur the pink city filled with lovely artefacts and textiles. Unfortunately you couldn’t take any pictures of the artefacts but it was a lovely way to spend a morning. 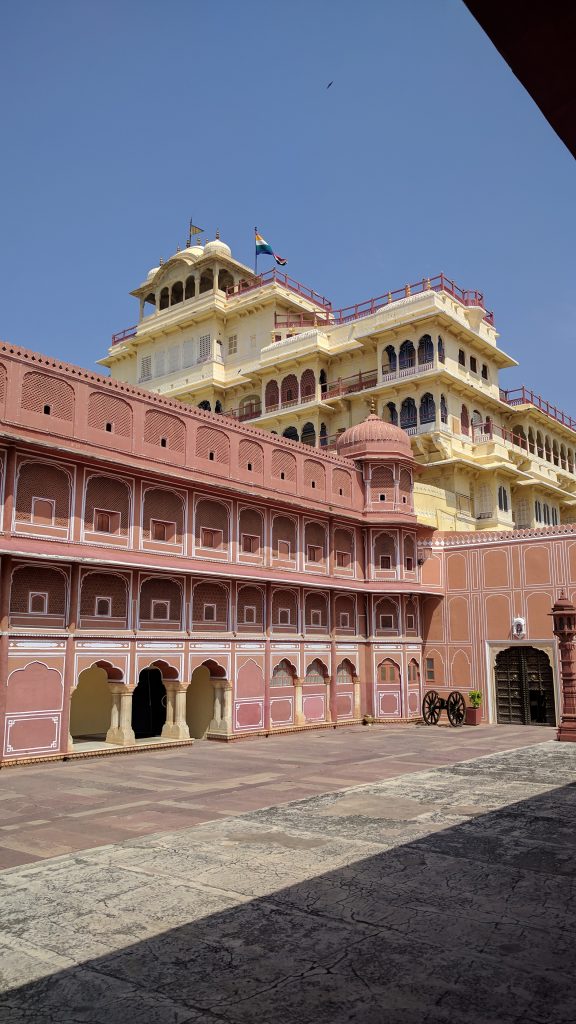 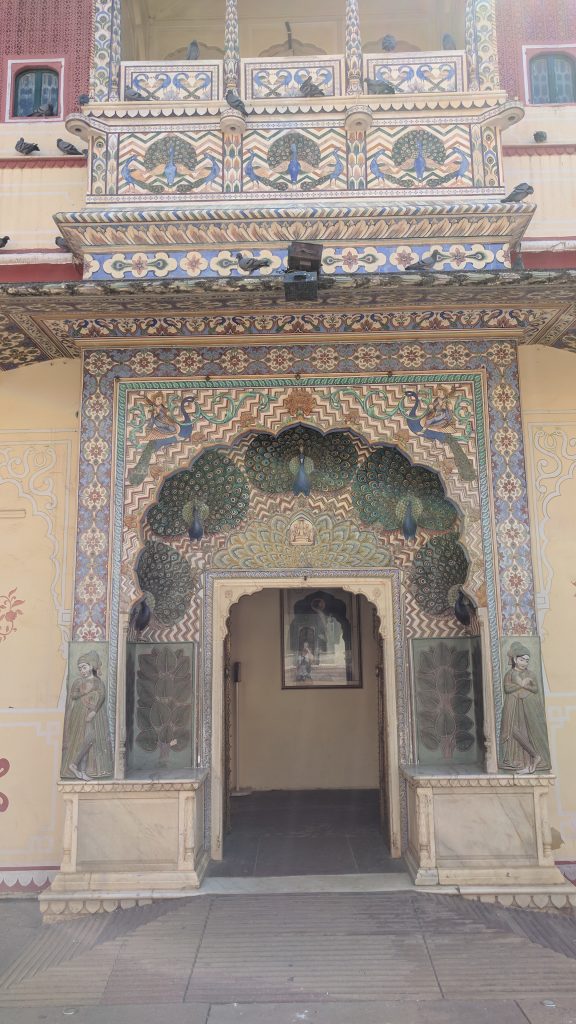 Next on the agenda was shipping, I needed to send a box of shopping home. But instead of taking us to the DHL office Shiv took us to Krishna Textiles which is the most gorgeous wholesaler full of textiles. Needless to say my box going home got bigger and we whiled away an hour or so looking at scarves, quilts and pyjamas. As Jaipur is famous for its block printing it was great to see the studio they print in and be able to buy some of the goods. A quick pit stop for lunch and it was round the corner to Ratnavali where we saw gems being cut and polished and then got to choose our own and design jewellery. I could have got very carried away here, it’s so much cheaper than the UK!
Slightly out of the centre of Jaipur is the Amber Fort and it was here we headed to for the evening. For some of the season it opens at night and if you can get there for that it’s so worth it. It’s much cooler but also the whole palace is lit up different colour floodlights. It makes it so romantic. The crown jewel of this palace is the mirrored palace. Constructed as a love letter from one king to his queen it’s completely covered in mirrors and just sparkles in the light. Hidden inside the sandstone is this brilliant jewel which is actually how I feel about a lot of Jaipur. 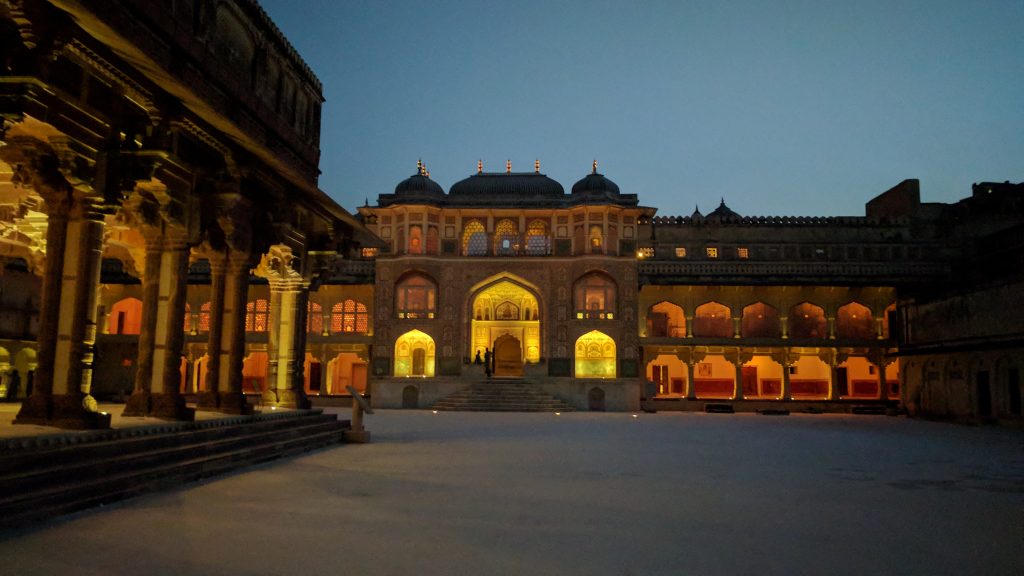 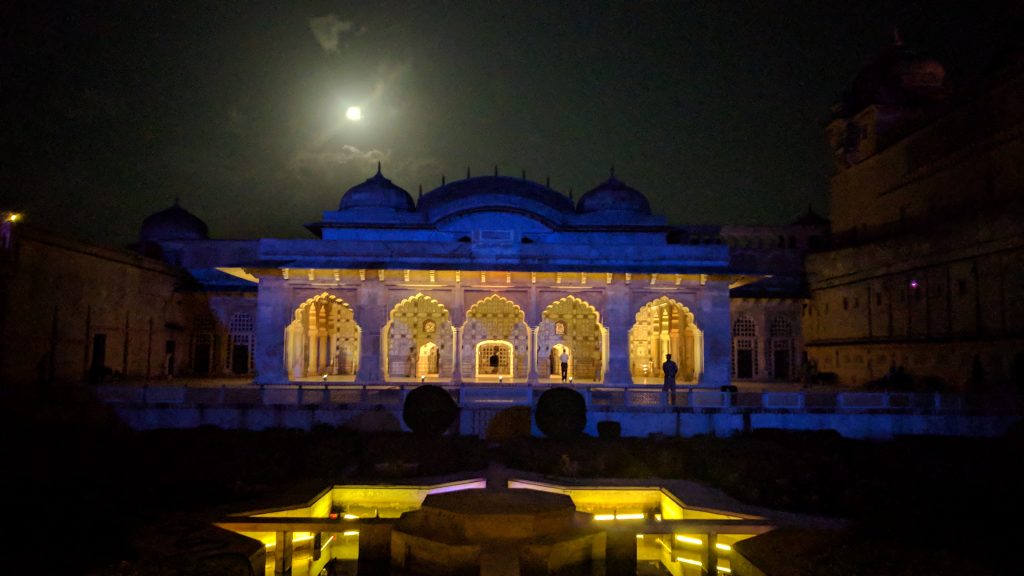 I thought it rough around the edges but if you hunt you find gorgeous little gems (of more than one kind!)