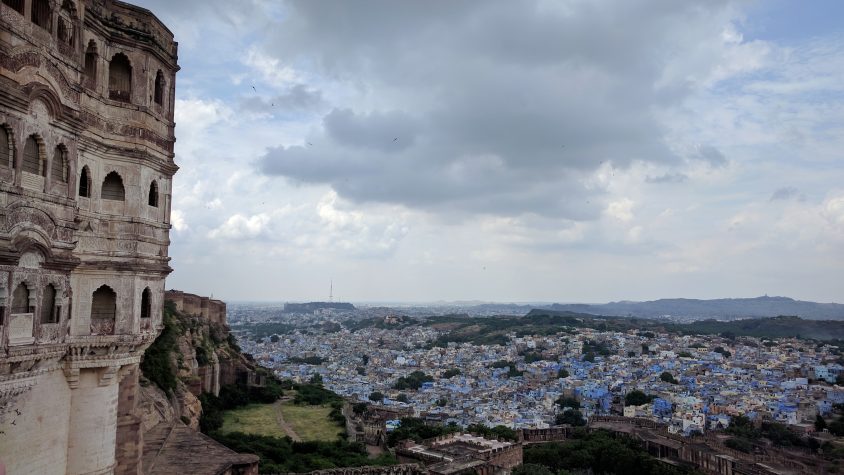 ​So here I am sat on a covered veranda in Jojawar, the tuk tuks honking in the background and the warm breeze blowing through the fret work thinking about the past five days. India so far has been incredible, noisy and dirty at times, colourful and awe inspiring at others. So far my travels on the G Adventures Rajasthan Adventure tour have taken me from Delhi to Jodhpur to Udaipur and Jojawar where we arrived on rain ravaged road at lunchtime.

Delhi was everything I expected it to be, overwhelming and noisy but with a run down charm, I’m definitely glad I was there with a group though. After meeting the rest of my adventurers we had our first taste of the Indian monsoon on our way to dinner and boy did it rain. Being British I know all about the rain but this was hard, fast and strangely warm, not nearly as unpleasant as our rain at home. Even so brollies were needed and the roads were like rivers! On the first night our tour leader Shiv took us for dinner at an Indian fast food place for thali, a platter of four or five different curries, chutneys and sauces. This was my first taste of proper Indian food and it definitely didn’t disappoint!

We only had one full day in Delhi for sightseeing but started off with a tour of some of the more residential areas by a former street kid organised by G Adventures in collaboration with the Salaam Balaak Trust. This trust is one of the charities in Delhi that helps to get street kids off the streets and into education. It was amazing to hear this young adults story of travelling from a village into the city, petty crime, rough sleeping and ultimately salvation from the trust. Amazingly he’s now studying for a degree. 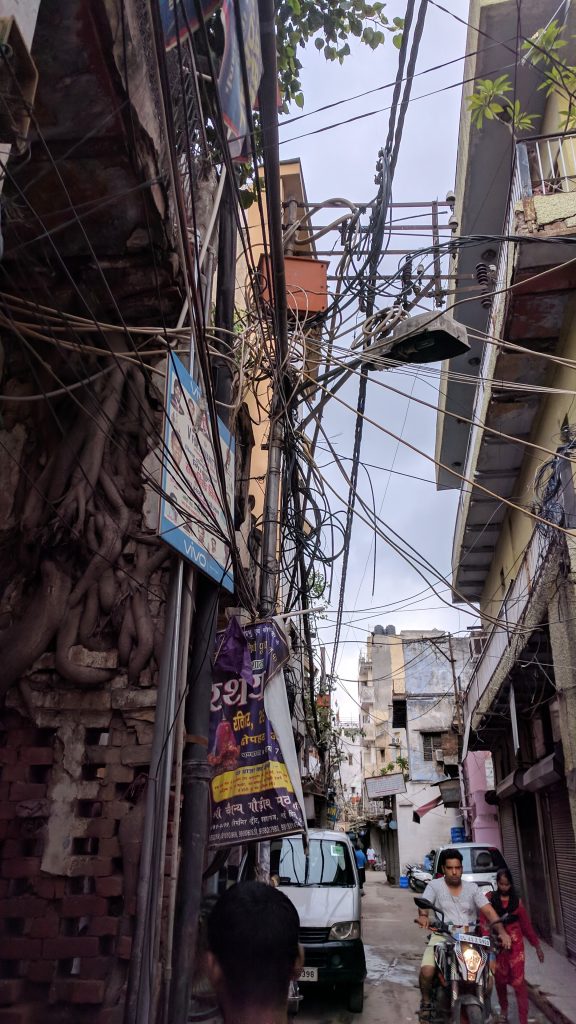 In Delhi we visited four monuments, all of which were fascinating, the Great Mosque of Delhi (Jama Masjid), Gurdwara Sis Ganj, Humayuns Tomb and the Qutub Minaret. During these sightseeing trips we also found out that as three blondes we’re quite the attraction too! Throughout our first five days we’ve slowly got used to being asked for photos or being strategically placed in the backgrounds of other people’s selfies! 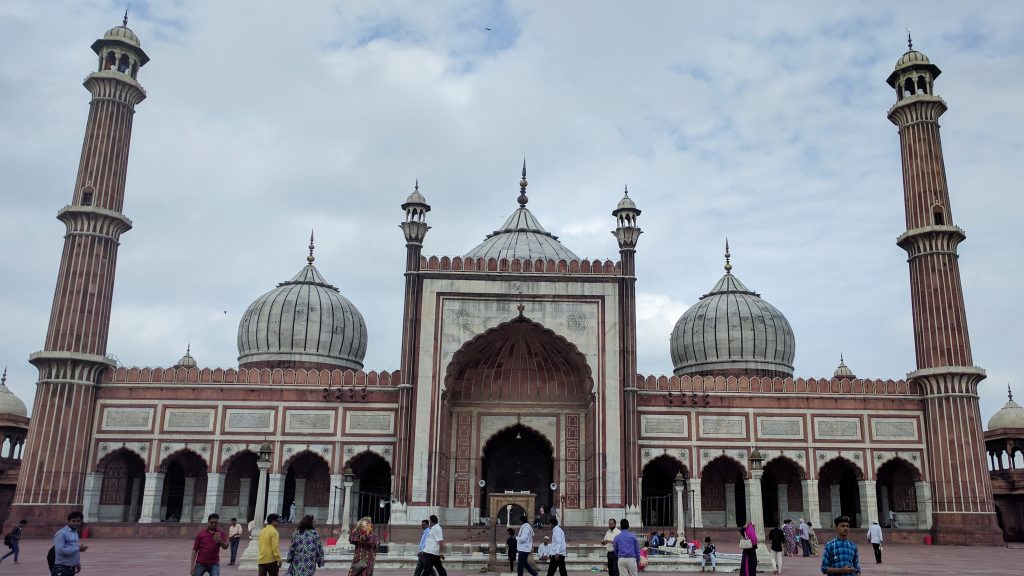 The Great Mosque of Delhi was commissioned by Shah Jahan who was the same Mughal Emperor who commissioned the Taj Mahal. Although there was only really the courtyard to see here the carvings are lovely and I got a good view over to the Red Fort. The Gurdwara we visited though was fascinating. Ever since I visited a Gurdwara at primary school I’ve been fascinated by Sikhism, the colours and music in particular and this didn’t disappoint. It was so lovely to sit on the ground and let the music and chants wash over you while taking in the colours of everything around you. 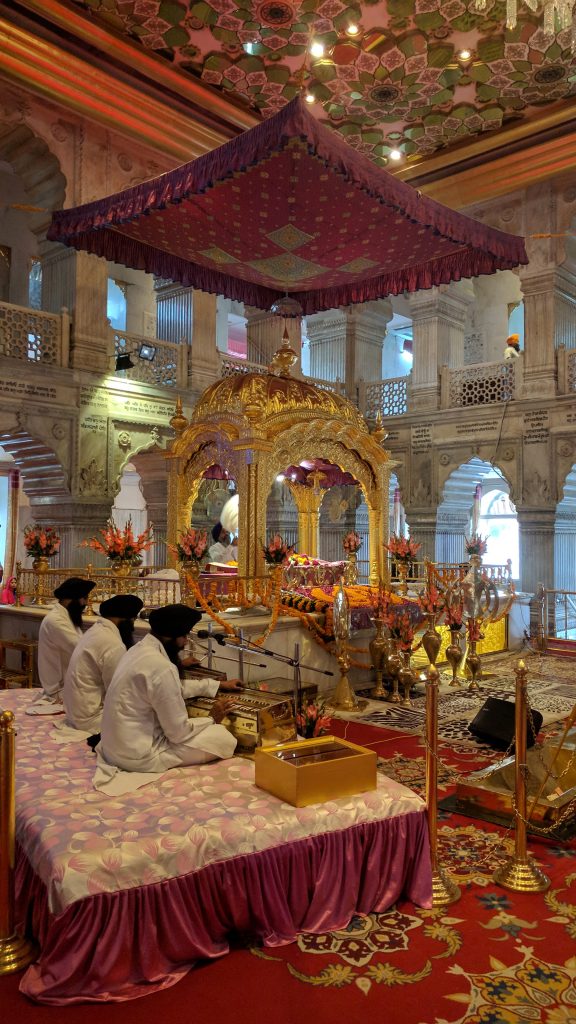 My absolute favourite things we saw in Delhi though were the Qutub Minaret and Humayuns Tomb. The architecture was amazing and the carved detailing everywhere so inspiring, I can’t wait to begin to play with the motifs! The Qutub Minaret is the tallest brick built minaret in the world and is completely covered in carving! 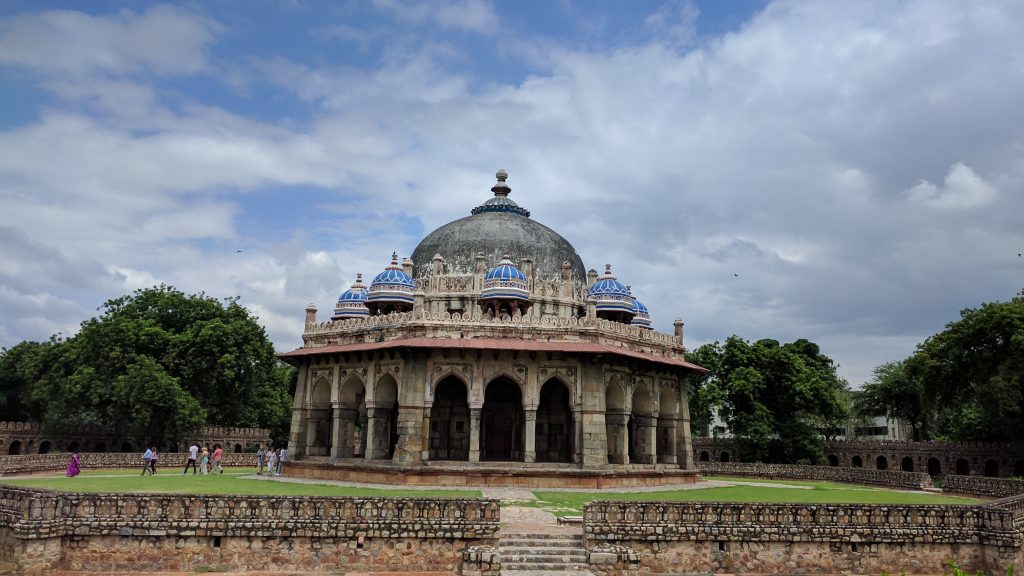 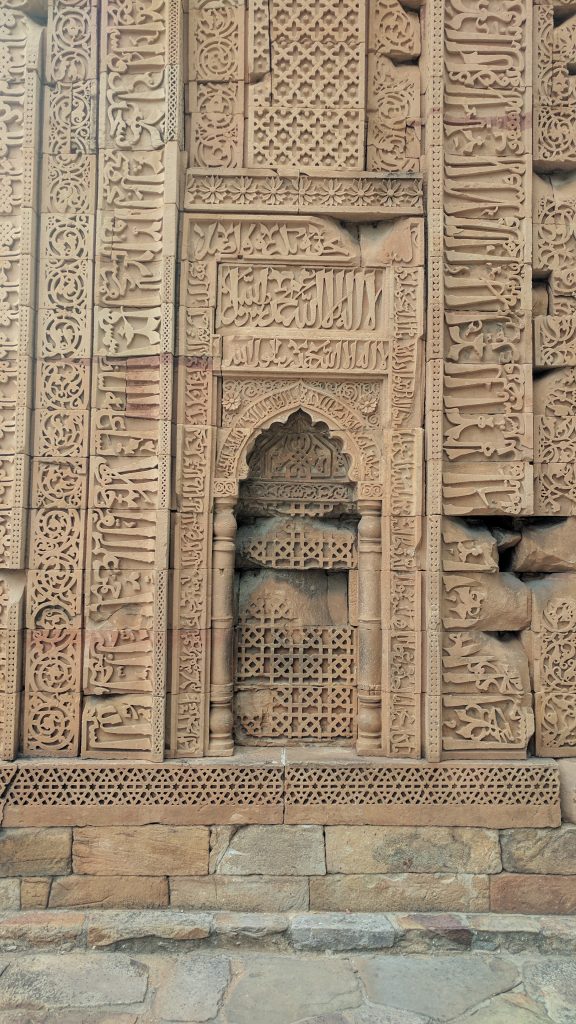 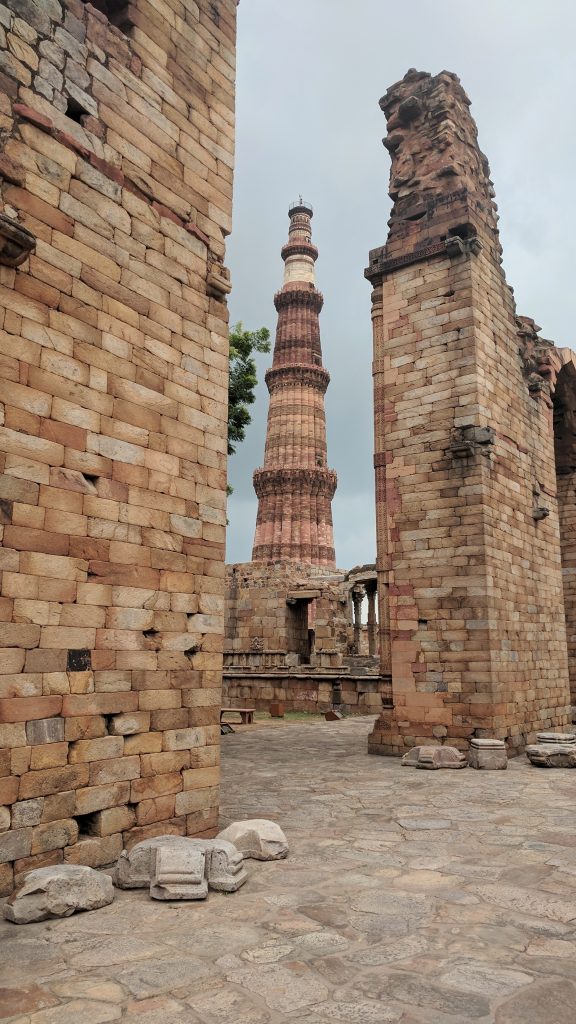 First day of sightseeing done though and it was time to head back to the hotel, collect our bags and head to the train station. With a sense of trepidation it was time for the night train to Jodhpur. This was part of the trip that I was quite anxious about, I’d read some scary accounts online regarding trains and female travellers but actually I really enjoyed it. I’m not going to say it was the best nights sleep I’ve ever had but fuelled with an Indian McSpicy (yes McDonalds…) I settled down into my bunk and managed to get some semblance of rest. The journey was twelve hours long and I woke to the Indian countryside rolling past, my first glimpse of rural India, full of cows, goats and women in the most beautiful saris. 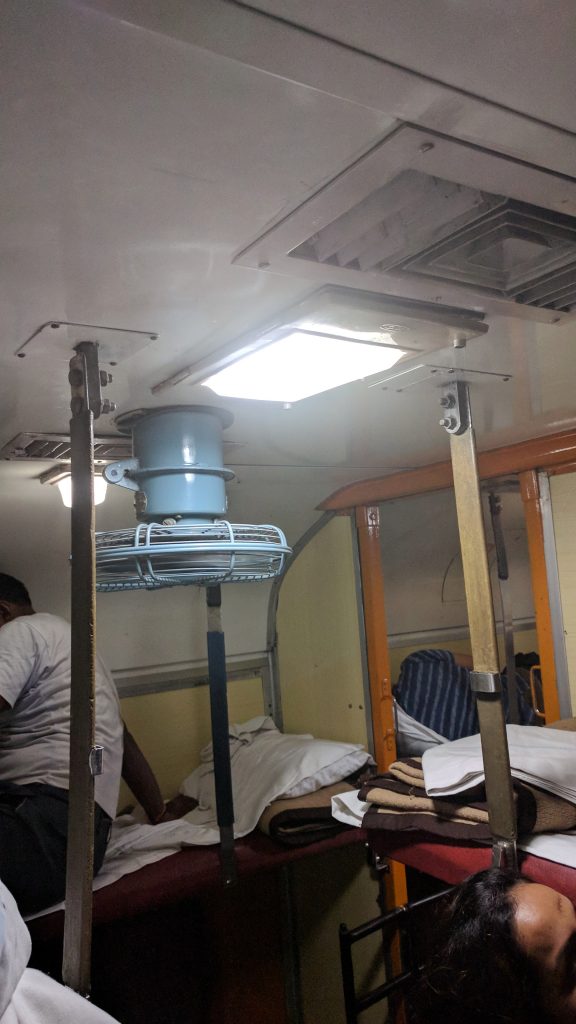 My view from my bunk

Arriving in Jodhpur at 8am we were met by our driver for the rest of our trip and checked into our hotel for a quick freshen up post train (although cleaner than expected it was needed!) Jodhpur is known as the blue city and it is dominated by the Mehrangarh Fort on the top of a huge hill in the centre of the city. This red sandstone fort towers over the blue buildings below and when you get that first view across the city from the fort you can see why it’s called the blue city. It’s believed that the colour blue helps to keep the mosquitoes away which is why so many of the buildings are blue.

The fort is spectacular and filled with gorgeous paintings and artifacts from the history of the Rajasthani Royals but the views were just something else. The heat here though was intense, shade and a very cold lemonade was needed and made all the better for the touch of ginger added to the sweet drink. We spent the whole morning at the fort and it was so worth jumping from shady spot to shady spot. In one particular spot we found a palm reader, fascinating and all I can say is it was all true and a brilliant insight. How they do it I just don’t know but I’ve got some great pointers for the next couple of years and beyond. 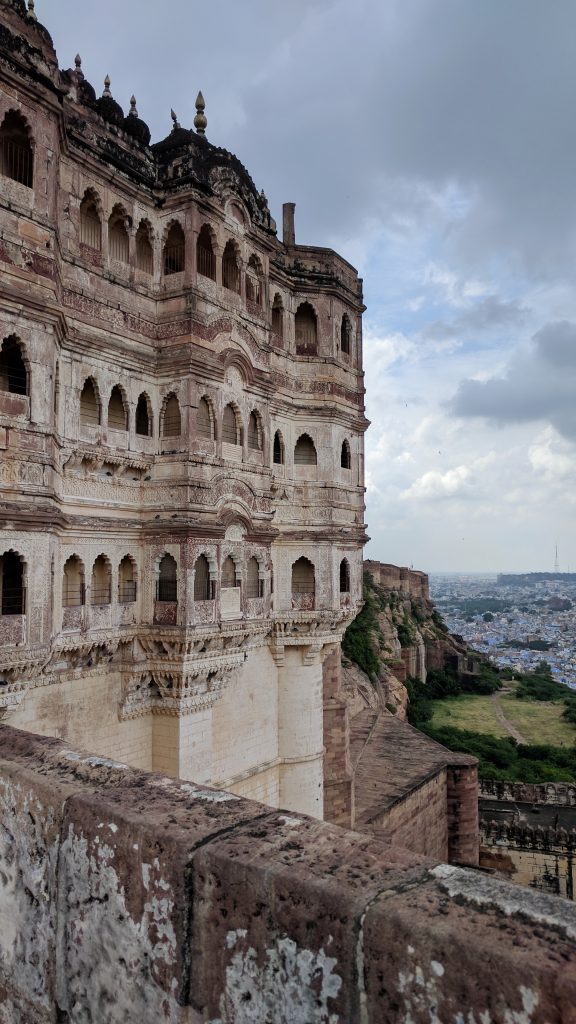 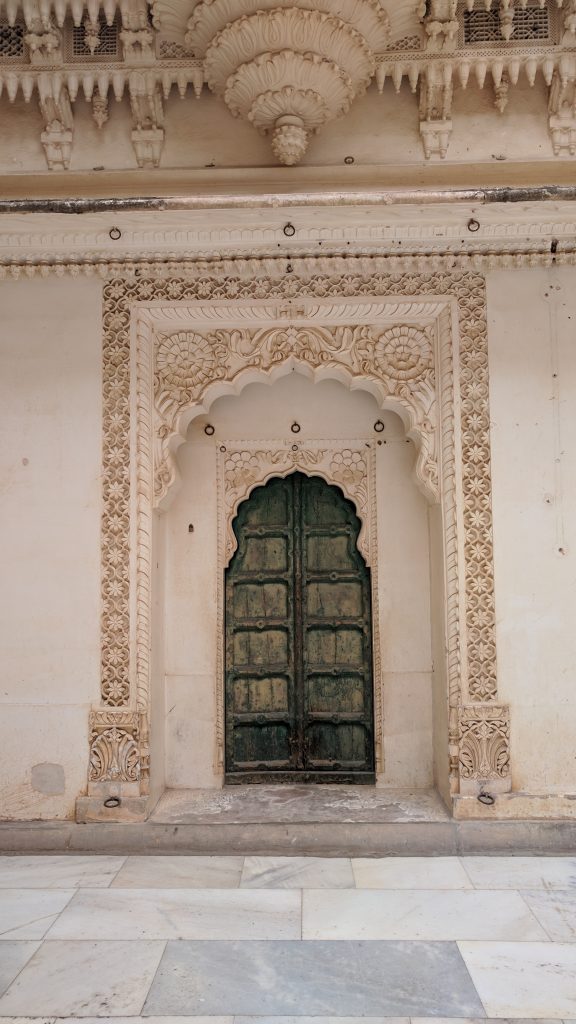 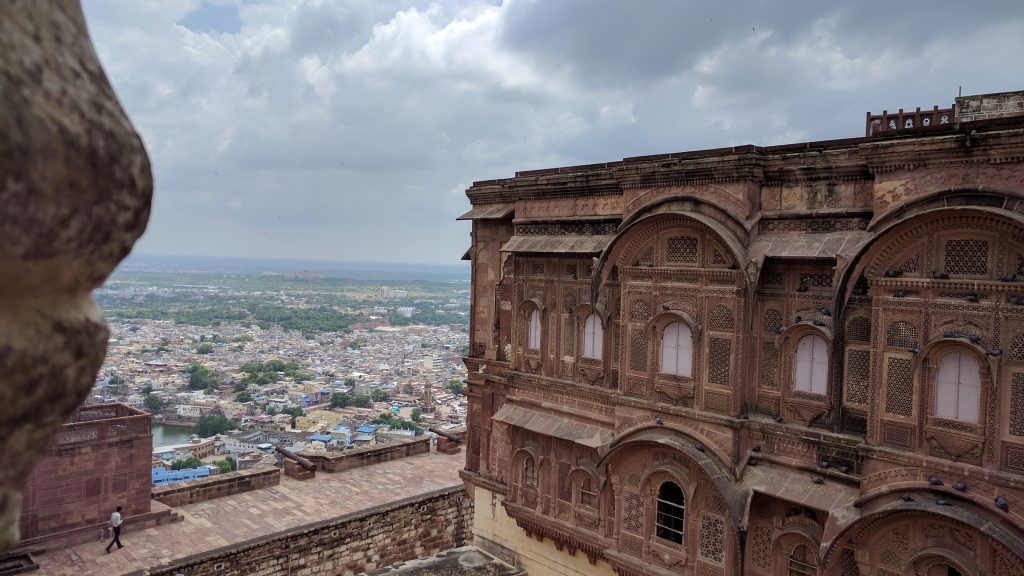 When the day began to cool back down we headed back out to the old city. Shopping and dinner awaited. After a wander around the old town and a stop off at a bangle shop our tour leader Shiv dropped us at what can only be called an Aladdin’s cave of delights. A cooperative full of the most incredible scarves, cushion covers, wall hangings and bed spreads, textile and embroidery heaven. We managed to while away over an hour here and all I can say is thank god they could ship home rather than having to carry it! 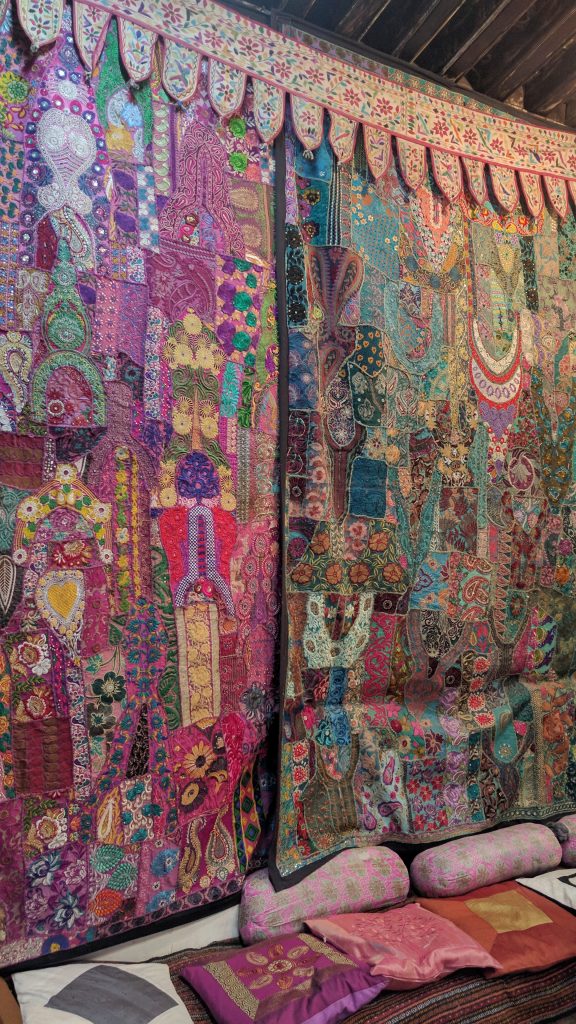 Shiv was rewarded for his shopping patience with a gorgeous dinner at a rooftop restaurant with stunning views of the fort. Butter chicken, garlic naan and garlic and cumin rice, just beautiful. Listening to the sounds of a parade winding its way through the streets which wed passed on the way to dinner. We only spent one night in Jodhpur which was a shame but next we headed to Udaipur, somewhere I was so excited to go to, didn’t disappoint but deserves its own entire post! 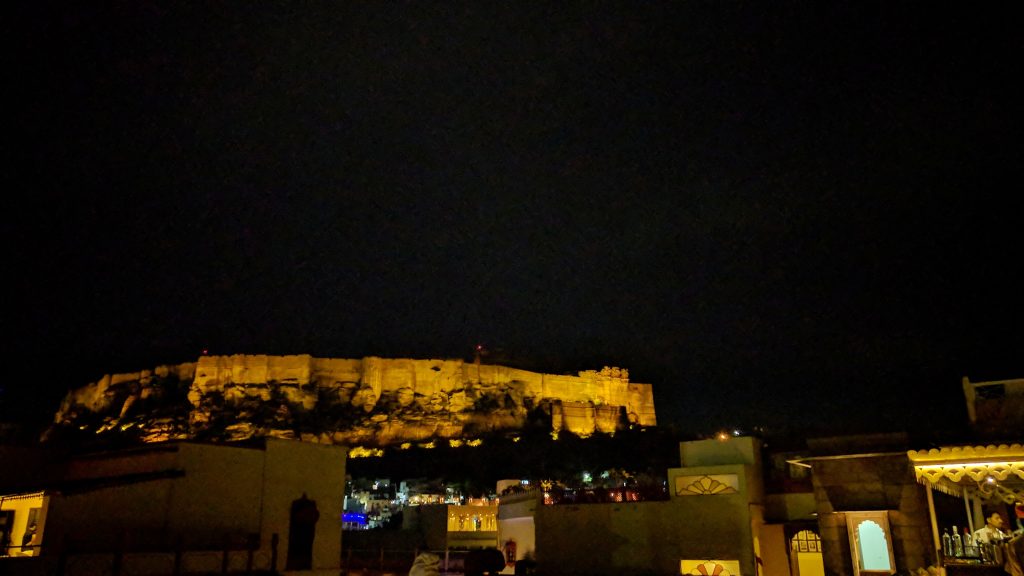